Benton takes to the road for Camp Mak-A-Dream 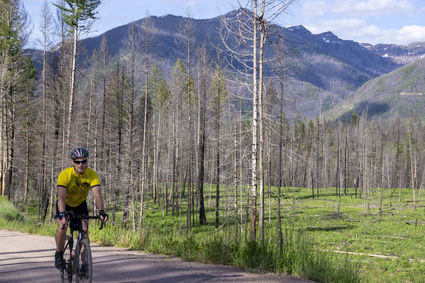 DJ Benton rides out towards Morrell Falls on a training ride June 10.

SEELEY LAKE - DJ Benton, of Seeley Lake, rode towards Mount Morrel on his 47th birthday May 10 with a goal to match his miles traveled to years lived. While he watched the trees and mountains pass him by on his ride, he discovered a herd of elk.

"It was fantastic. They weren't sure what to make of me," Benton said. "[Biking] makes me humble because you slow down. Me being a rookie cyclist, I am not fast anyway."

The nurse practitioner recently got into cycling to stay in shape during the summers. Despite cycling for just a little over a year, Benton is preparing for a 120-mile ride through mountain passes and alongside rivers, all while raising money for children's summer camp Camp-Mak-a-Dream.

At first, Benton wanted to be active outside of cross country ski season. He tried endurance running and ended up with a nagging foot injury that just wouldn't go away. Eventually, it became clear to him he would have to find another sport to keep him active.

He decided to start cycling and train his way up to riding in the Ratpod - a one day, 124-mile ride around the Pioneer mountain range. Since he just started in April 2019 there was no way he could be fit enough to do the full ride by June 20. Instead, Benton took his ancient road bike and did the 62-mile option, which he successfully completed.

"That was what sort of launched me, was training for that. I really got into it," Benton said, and added. "There is a saying among bicyclists that almost any idiot can ride a bike, but it takes a special kind of idiot to want to ride it 100 miles."

Benton enjoys cycling because of the structured rides, which let him slowly increase his distances and speed and also because of end goals, like races. When he gets into the rhythm of a long ride, Benton feels his mind clear.

"You just keep going and going and you get this clarity where I stop thinking," Benton said. "It's almost like meditation."

In addition to his goal of clarifying fitness, Benton also cycles to raise money for Camp Mak-A-Dream, a summer camp designated for children with cancer.

The camp's home page explained its purpose is "to empower survivors and their families to live with and beyond cancer through life-changing Montana experiences where they strengthen life skills, gain resilience and develop lasting relationships."

The camp gets some money through the Ratpod. Riders individually raise money through donors and sponsors, which all go into a general fund. As of June 11, riders raised $117,000 out of the $150,000 goal.

For Benton, he wanted the kids, who often have to battle with chemotherapy and pain, to feel comfortable

"It just hit me one day when I thought about a kid with cancer and to picture that kid to go to a camp and feel like they belong is important," Benton said.

DJ has raised over $1,000 in each of the last two years, and credits his family for getting the word out to donors, as well as being there for him.

"I am very blessed to have my wife Carrie and daughter Sera who are like my team. They are supporting me," Benton said. 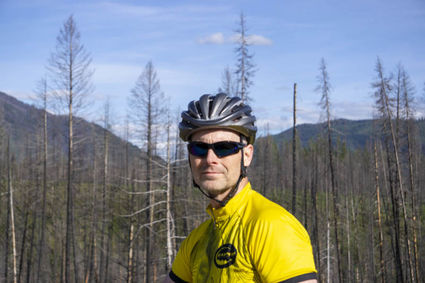 DJ Benton will be participating in his second Ratpod to support Camp-Mak-A-Dream June 20.

This year, the ride will not be meeting at the Pioneer mountain range as normal due to the coronavirus. Instead, riders will be doing the journey remotely, wherever they want, whenever they want, and as far as they want.

Despite not being required to ride the full length, Benton committed to achieving his overall goal. On June 20, he will ride 124 miles, the longest distance he has ever covered in a day.

Benton will leave from his house by the airport and jump onto Morrell Creek Road. From there he will ride Cottonwood Lakes Road to Ovando and then hit Dry Gulch Road, shoot up Huckleberry pass and then back to Ovando for a burrito. Then in the afternoon he will ride towards Lincoln and finish close to Helena.

Benton said, "I just have to take my time, enjoy the scenery and look forward to barbecue and beer at the end."