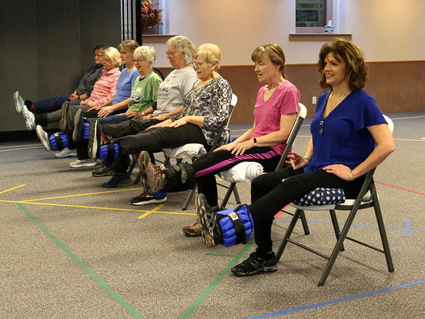 As Montana's aging population continues to grow (18.9% of Montanans are now 65 or older), rural residents face the same aging challenges as their urban counterparts but often with fewer resources.

A low-cost, high-benefit strength-training program offered through Montana State University Extension may be one solution for how seniors living in small towns can access a fitness program that will help them age well.

"Keeping our aging population strong, able to do activities of daily living by themselves, and helping them to reach fantastic quality of life or stay there and maintain that is very, very important," said Michelle Grocke, Ph.D., an MSU Extension health and wellness specialist.

Every decade after the age of 30, humans lose 3% to 5% of their muscle mass. This progressive loss of muscle can negatively impact a person's metabolism and bone density and increase the risk of falling, particularly during Montana's icy winters, Grocke said.

The good news is that research shows that strength training, starting at any age, can slow muscle loss and decrease the risk of osteoporosis, a weakening of the bones that afflicts some 10 million Americans. "You're never too old to start," she said.

DPHHS says that adults should also do muscle-strengthening activities of moderate or greater intensity that involve all major muscle groups on two or more days a week. Older adults should also do exercises to help maintain their balance, DPHHS says, and if they are limited by chronic conditions, they should be as physically active as their abilities and conditions allow.

Grocke said DPHHS statistics show that as of 2016 nearly half of all Montana resident deaths are the result of either heart disease or cancer, and as of 2015, 600,000 Montanans (about 60% of the population) had at least one chronic health issue.

"As we age, the likelihood and risk of developing a chronic disease becomes higher," she said, but there is also research showing that regular exercise can help prevent chronic disease. Adding to that research, Grocke and colleagues in Texas and New York are conducting a randomized control trial, started last fall, to determine whether the StrongPeople program can reduce heart disease and the risk of diabetes in people 50 and older. They plan to have results from the trial to share later this year.

"I've enjoyed it," he said after a one-hour class in late February.

After he stopped working on the ranch, he said, "I got flabby." Thanks to the exercises, he said, he has more strength and energy to do yard work and finds it easier to go up and down the four sets of stairs in his home.

MSU Extension became involved in teaching strength training because food and nutrition specialist Lynn Paul (now retired) recognized that many people in rural communities do not have access to indoor workout facilities and guided exercise programs. She found a program aimed at menopausal women called StrongWomen and brought it to Montana in the fall of 2008.

Paul worked with StrongWomen creators Miriam Nelson, Ph.D., then the director of the John Hancock Research Center on Physical Activity, Nutrition and Obesity Prevention at Tufts University in Boston, and Rebecca Seguin, now the associate director of the Texas A&M AgriLife Research program and director of the StrongWomen/StrongPeople program in College Station, Texas.

Twice a week for 12 weeks, participants get together for a one-hour workout, doing hand and ankle weight lifting, stretching, and balance exercises that work the large and small muscle groups. They are also encouraged to do a one hour workout once a week at home, for a total of three hours of training per week.

The class in Teton County is free. Alice Sutherland, a 77-year-old retiree, drove an hour one way to get to Wolery's StrongPeople class in Choteau. Halfway through the program, she said she was already less "wobbly."

"I just feel more secure no matter where I am walking," she said, adding that part of her goal in taking the workout classes was to extend the time she can live in her own home (which has two sets of stairs) and take care of her pets.

MSU Extension has 20 trained StrongPeople instructors. Grocke said about 80% of them are Extension agents, while the remainder are community volunteers. They teach the classes in libraries, courthouses and church meeting halls, among other venues.

Wolery, 51, has been an instructor since 2008. When she started teaching the program, she found three-pound leg weights a challenge. In the class she taught last winter, she used 20-pound leg weights.

She supplies hand weights and cuff-type leg weights in increments of one, two, five, 10 and 20 pounds. Participants progressively increase their weights and typically start seeing results after the first four to six workouts.

Many of her female class participants are doing strength training for the first time. Some are afraid they will get too buff, while others are intimidated by the weights.

One of Wolery's class participants, retired Eureka nurse Donna West, 75, said this was her first strength-training class. After taking several weeks of the class, she said, "I think the most noticeable thing that I feel is it's easier to get around. I'm motivated to get up and do things." Having recently moved with her husband to Choteau, she said the class has also helped her make friends here. "You feel included," she said. "You feel like you're part of the community."

Grocke said two years ago MSU Extension started measuring the physical, mental and social health outcomes of participants in the classes. "We are seeing great results," she said.

In 2019, 315 Montanans of all ages took the StrongPeople program and completed a post-class evaluation about their experience. That evaluation shows:

• 94% intended to engage in similar physical activity routines outside of class.

• 73% reported a decrease in chronic pain.

Grocke noted that Montana has a high suicide rate, and many rural residents have feelings of social isolation, so determining that StrongPeople classes help foster new friendships was an unexpected and welcome discovery. Participants have told their instructors that they signed up for the strength training, but stayed for the social connections, she said.

When she started teaching the classes, Wolery said, she didn't expect the amount of mental and emotional strength the class could give people. "I really had no idea about the strength it would build in people, not only in their muscles, but also in their communities," she said. "The mental uplift part of it wasn't the primary focus, but it's half the component of the class to me."

Wolery said one participant in her classes progressed from using a walker at the start of the class to using just a cane, and is now walking unassisted because her legs are stronger and her balance is better.

Wolery, who taught the winter class in the fellowship hall of the Choteau Baptist Church, had talking points, brain teasers and ice breakers for every class. She also slipped in as much MSU Extension educational material as she could. Her "Extension Extras" have included resources on nutrition, food safety, mental health, financial management, estate planning and more. She came to each class with handouts to send home with her students.

Teton County Sheriff Keith VanSetten, 60, of Choteau has always worked out, but has found that Wolery's class works well with his work schedule and has given him good results. "I think my fine motor skills have improved. My balance is a little better. I notice things in that regard," he said, adding that going up and down stairs has become easier too. 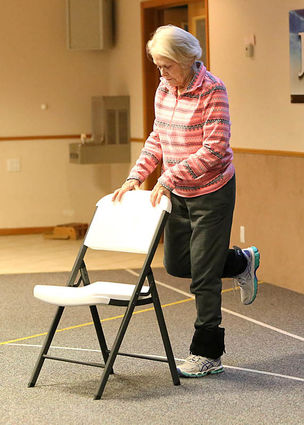 Dutton resident Alice Sutherland, 77, focuses as she does leg-lifting exercises during the fall session of the StrongPeople program in Choteau.

He also likes the noncompetitive nature of the class and appreciates the information Wolery shares. "Jane does a fantastic job with keeping us entertained and giving us new information. She's always talking, that's why I'm the counter," he said, smiling as he explained that he often keeps track of the number of repetitions for each exercise while Wolery shares her Extension Extras.

Choteau homemaker Juli Kostelnik, 52, said she has never been a big workout fan, but she and a couple of friends often walked on the treadmills in the weights room at Choteau High School. She saw other women there doing strength training and thought, "This looks like something I can do," she said. When Wolery advertised the StrongPeople class last fall, she and her husband signed up. "It just feels good to be doing something," she said.

There are now 2,500 StrongWomen and StrongPeople trainers across the nation, most of them through state Extension programs. In addition to Montana, the program is offered in Wisconsin, Pennsylvania, Kansas, Arkansas, New York, Texas and Alaska, mainly in rural areas.