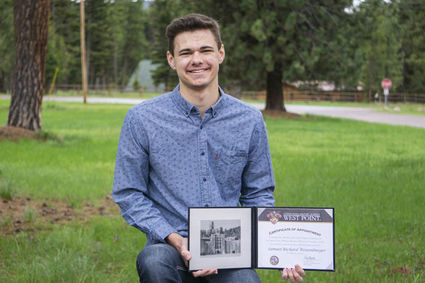 Seeley-Swan High School senior Samuel Weisenburger holds his Certificate of Appointment to West Point for the class of 2024.

SEELEY LAKE - Though his plans for the future were not set in stone, Sam Weisenburger knew he would go into service leadership. Now with high school wrapping up, he decided to become an Army officer.

"I learned that you can always have a plan but make sure you are flexible to change," said Weisenburger. "There's a certain point when you realize it's about taking it in and understanding that you'll do better."

The Seeley-Swan High School senior was appointed to go to school as a cadet at West Point, an honor bestowed to just about 1,200 students a year, according to West Point's website.