The origins of 'quarantine' 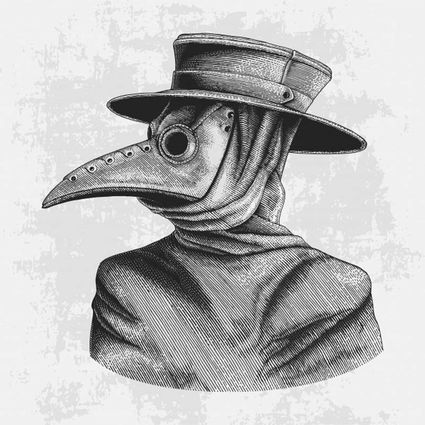 This was a doctor's mask during the 16th century plagues.

SEELEY LAKE – The word quarantine has been much in the news lately. In terms of COVID-19, it means stay in your home away from other people for 14 days. But where did the word come from? Interestingly, it originated during another pandemic, the bubonic plague that spread across Europe in waves.

Quarantine derives from the phrase "quaranta giorni" which literally means "space of 40 days." It refers to the policy, first started in Venice, Italy, in 1377, of refusing to allow ships arriving from plague-stricken countries to dock until they had remained offshore for a certain period of time. First set at 30 days during the Black Death, by the recurrence of the bubonic plague in the 1660s the time had extended to 40 days. Apparently that seemed a sufficient length of time for the plague to kill all on board the ship who were susceptible to the disease. Presumably, the few survivors and the cargo were no longer able to transfer the plague to the city.

In the fourteenth through seventeenth centuries, the people had no way of knowing bubonic plague spread through rat fleas. Their reactions to the disease were simple, if draconic. Aside from ship quarantines, home quarantine of those with symptoms sometimes took the form of sealing the house so that no one inside could get out. A red cross and the words, "Lord have mercy on us" were painted on the door.

In other areas, the sick were dragged to small nearby islands and left to die. Some places created Pest-Houses outside the city limits. Though nominally these were hospitals, there was no treatment offered and death was inevitable.

In fact, there was no effective treatment for the plague. Nonetheless "plague doctors" offered a variety of remedies for those who could afford their services. Remedies ranged from blood-letting to rubbing onions, herbs, chopped snakes or cut-open pigeons on the body, to drinking vinegar, arsenic, mercury or 10-year-old treacle (a molasses-like substance), to eating emeralds that had been crushed into powder. Many who believed the pestilence was punishment for sin became "flagellants" and whipped themselves through the streets in a public display of contrition. Others accused the Jews of poisoning the wells and followed up by massacring or burning those in Jewish communities.

While the rich fled the cities if they could, the poor were left to dubious means to try to prevent getting the disease. Some purchased written anti-plague charms which they kept on their person, sometimes the charm was written on the body in blood. The rumor circulated that "no London tobacconist had died from the plague" and caused an increase in the sale of tobacco as a prophylactic. On the theory that the pestilence was airborne, people carried posies or nose-gays consisting of small bags of dried flowers or herbs, which they sniffed frequently.

By the sixteenth century, extension of the nose-gay theory resulted in an identifiable Plague Doctor costume. The neck-to-ankle protective garment consisted of a leather or waxed-canvas gown impregnated with herbs. Leggings, boots, gloves and a hat were made from the same material. But the most distinctive item was the mask head-covering with sealed eyeglass openings for vision and a long, curved bird-like beak. The beak was filled with herbs, spices, camphor, dried flowers or a vinegar-soaked sponge. Two small holes, one on each side of the end of the beak, created a type of respirator which insured that the air the doctor breathed traveled the course of the herbs before entering his lungs.

The final item of the plague doctor's uniform was a long stick or cane with which he could examine the patient while still maintaining a safe distance. It also served as a weapon for restraining desperate victims or family members.

Sometimes a whole village decided to hire a plague doctor. Aside from treating and preventing the pestilence, the doctor also was expected to keep a public record listing the dead. When requested, which was often, he wrote down the patients' last testament.

With the wealthy fleeing and the dead carts and dying homeless the only ones in the streets, business and trade came to a halt. Not even food vendors were allowed in the cities. According to the Wikipedia entry on the Great Plague of London, informed by James Leasor's book "The Plague and the Fire," "...the villagers around London, denied of their usual sales in the capital, left vegetables in specified market areas. They negotiated their sale by shouting and collected their payment after the money had been left submerged in a bucket of vinegar to 'disinfect' the coins."

Looking back at the measures taken to quell pandemics in the Middle Ages and Renaissance Period, the present-day measures of 14-day self-quarantines, social distancing and wearing masks and gloves don't seem so horrible after all. And what's more, those measures work. Certainly better than carrying a bag of posies or burning our Chinese neighbors.