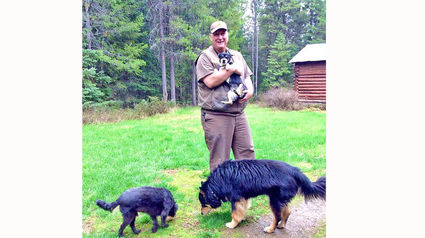 UPS driver Matt Hoge hanging out with Kathy Koors' dogs on one of his last stops before retirement. Hoge retired May 7 after 24 years as a driver. Koors, who boards dogs, said that there were times when 10-15 dogs would greet Hoge and he always had enough cookies in his pocket. While others were amazed that her dogs loved the UPS guy, Koors would laugh and tell them, "Oh, you don't know Matt."

SWAN VALLEY – It was just another day delivering packages to the Swan Valley. UPS driver Matt Hoge was within 10 feet away from the house carrying a package when two black bear cubs came running out from the corner of the house. While they narrowly missed Hoge who was in shock, his attention quickly shifted to the sow that was right behind them.

The homeowner, who had opened to the door to greet him, stepped back into the house and closed the door.