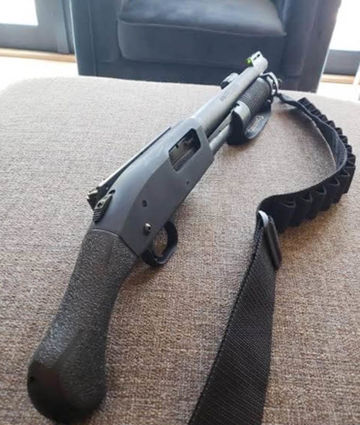 This photo appeared with Kevin Wetherell's profile photo and the statement "Stay out of our Neighborhoods and this incident will not happen again." Wetherell denied that he posted the racist remarks writing on his personal Facebook page, "To the public angry about these statements, you should be mad. I am furious too." The Pathfinder was able to find this photo posted on a gun forum in 2018 by another Montana resident. The post in the gun forum did not have a racial tone to it.

SEELEY LAKE – Saturday afternoon, May 9 Clearwater Montana Properties CEO Kevin Wetherell found himself in the crosshairs of a social media storm when his name and image appeared on a post in the "Justice For Gregory and Travis McMichael" private Facebook group. The post, accompanied with a photo of a tactical shotgun lying on a chair read, "Stay out of our Neighborhoods and this incident will not happen again."

Wetherell quickly denied the post on his personal page posting, "I was hacked, or someone created a fake Facebook page with my name and image! Racist posts being made under my name are not me."

The private group where the original post appeared was set up in support of Gregory and Travis McMichael who were both arrested May 7 for the killing of Ahmaud Arbery, a 25-year-old black man. The case has drawn national attention to Brunswick, Georgia as it took more than 10 weeks for the McMichaels to be arrested.

The McMichaels, who are white, claimed that the unarmed Arbery was shot in self-defense after they chased him down and confronted him. The McMichaels have said they thought Arbery was a burglar who had been targeting their neighborhood. Arbery's family has maintained that he was just out jogging.

Wetherell's post denying the racially charged post drew more than 1,600 comments in less than 24 hours. Most of the comments were calling him a liar and a racist while others made threats against Wetherell, his family and anyone who attempted to stand up for him.

The storm didn't stay on Wetherell's personal page and spread across Clearwater Montana Properties Facebook pages as well as other trade pages such as the Montana Association of Realtors.

Clearwater Montana Properties also started receiving dozens of negative reviews on sites like Google and Yelp. Media organizations across Montana were notified of the post. The Pathfinder received a screenshot of the post Saturday afternoon and several more times throughout the weekend.

A search of the private group's membership just hours after the post turned up no users with Wetherell's name and the screenshot of the original post was no longer visible on that site.

Several of the comments insinuated that the photo of the shotgun belonged to Wetherell even going as far as to compare the background of the photo to other photos on Wetherell's page.

The Pathfinder tracked down the photo of the shotgun using a reverse photo search engine. The photo appeared on an unrelated gun forum in a 2018 post about a person's new "home defense gun." The post from a Montana resident had no racial tone to it.

The Pathfinder interviewed one Facebook user who claimed to have seen the original post. When they clicked to view Wetherell's profile they found it was mostly blank.

The user provided the Pathfinder with a screenshot of their browser history from the day the original post was made. The history log matched their story.

From the history, the web address of the poster's page does not match that of Wetherell's real page. Visiting the address now leads to an error code stating, "Sorry, this content isn't available right now."

Another citizen, also investigating the incident, had already requested the history. When the Pathfinder contacted the citizen, the timestamp on the screenshot matched the time of their request.

The Missoula County Sheriff's Office confirmed Monday, May 11 that the incident has been reported. Wetherell is hopeful that law enforcement can obtain a subpoena to compel Facebook to release the information of the person who started the alleged fake account.

"Please believe me as I say that these racist statements being made under my name are not from me. As a long-time real estate broker and proud member of our community, I know the importance of home and the benefits of a diverse community where neighbors respect and trust one another," wrote Wetherell in a statement to the Pathfinder. "In fact, for those who want to know my personal opinion, I believe Ahmaud Arbery was murdered. I believe it was a hate crime and those responsible need to be brought to justice. I pray for his family and friends."

Editor's Note: Due to the volatile nature of the alleged post, the Pathfinder chose to not disclose the names of the sources. We have taken extra steps to verify the information presented by those individuals.