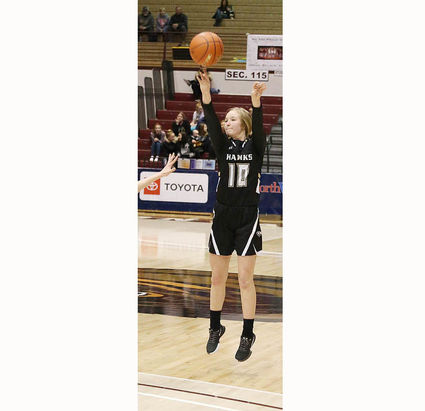 Senior Terra Bertsch sends in a three-pointer against Melstone. Bertsch had 8 points in the game.

MISSOULA – The Lady Blackhawks bowed out of the State C Basketball Tournament after falling to Melstone in their opening game March 12 and Scobey the next day.

Both the Lady Blackhawks and Melstone spent the first quarter testing each other's defense looking for a way to break through. The defense was winning with the score just 4-4 after the first quarter.

The Lady Blackhawks finally found their groove at the start of the second quarter putting up 10 unanswered points but Melstone fought back to 15-9 by the half. Neither team shot well in the first half though the Lady Blackhawks were si...