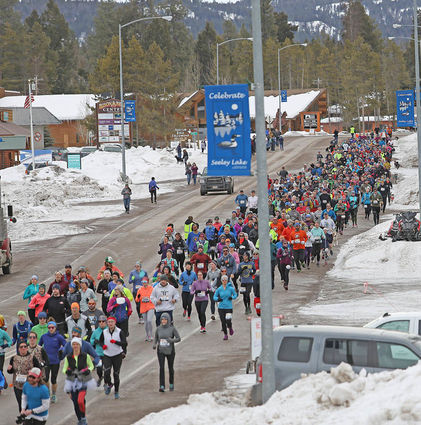 Highway 83 was a wall of people in the southbound lane running north to Boy Scout Road Saturday morning. Spectators came out to cheer. The Filling Station sign invited all the racers in for a free beer...only 13 miles to go. Photo to the south from the top of The Filling Station.

SEELEY LAKE – Nearly 700 runners "Took the Leap" and ran around Seeley Lake in the 41st annual Snow Joke Half Marathon. This was the second time in race history the Snow Joke has fallen on Leap Day. The last time was in 1992 when the Cheetah Herders were still organizing the race. For the second year, Run Wild Missoula and the Missoulian organized the race and were excited about the turn out. Racers agreed it was a beautiful course and a beautiful day to "Take the Leap on Leap Day."