Close calls and near misses in Montana State Parks 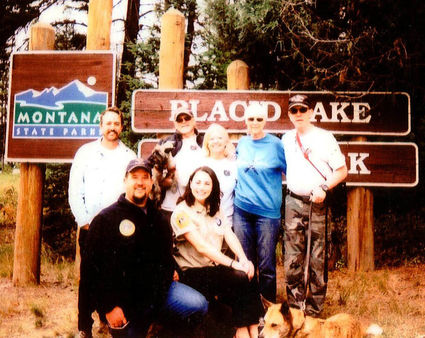 Over this past Christmas holiday season, I was reminiscing with a group of four friends. The conversation took a normal course; inquiring about each other's families and the various home projects we were working on. We were all laughing, joking and sharing wisecracks at each other's expense. As the tide of conversation changed, one particular topic was enjoyed more than others. It was the topic of "funny things that happen at work." If you have ever had a friend who works in an Emergency Room, then you have likely been riveted by an incredible "ER" story. We all have these stories and the funniest ones generally involve a seemingly normal series of events that culminate into someone else's misfortune. Here are a few stories that you might enjoy, as experienced through my years working for Montana Fish, Wildlife & Parks.

While working on the maintenance crew at Bannack State Park, I was trained in the art of "arrested decay." I helped provide maintenance and upkeep on some incredible historic buildings in Montana's first Territorial Capital. During busy days we all stepped up to help, no matter your job title, to complete a task.

On one extremely cold morning in late April, the park was visited by eighth grade students from St. Ignatius and Ronan who were on an educational field trip. Once they arrived at Bannack, the students were split into smaller groups and each group got a tour or participated in an experience. My station for this group was the gold panning station; I would bring the students to a cluster of four very large livestock tanks where we had a large pile of pay dirt for the public to get hands-on experience panning for their own gold. This was always a crowd favorite because almost every pan had gold and they got to keep what they found.

Despite the temperatures being right at the freezing mark, the first group of the day insisted they try their hand at panning despite knowing their hands would get very cold in the water tanks. Before we began we had to remove a thin layer of ice from the tank surfaces. Then I gave the group a demonstration of the panning techniques involved with placer mining.

I wandered amongst the participants to see if they needed help or had any questions. One particular student was very cold but refused to quit. She was standing at the head of a tank, bent over at the waist, knees locked and her whole body was tense as she fought the cold. All at once she stood up to say something and in one fluid motion she fell straightforward into the tank of water like a belly flop. She had her muscles all tense and locked up fighting the cold and when she stood up, her blood didn't get to her head in time and she went completely unconscious.

I quickly pulled her out and she re-gained her awareness, we then brought her to a warm building. I was gifted a "St. Ignatius Bulldogs" coffee cup for my efforts to help.

Burning at state parks is a great tool to get rid of appropriate debris. During one such burn event at Makoshika State Park, we were cleaning up a very old, dilapidated rifle range that was inside the park. FWP had purchased the land with the rifle range but subsequently a new and vastly improved rifle range was constructed outside the park with better facilities at a safer location. We made a burn pile out of everything that could be burned and hauled off the rest.

It was winter, so fire danger was not a concern and we were able to make a neat pile that would burn fast and hard. After about 20 minutes of burning and building up of heat, we started hearing distinct "pops" and "cracks" that were more than moisture cooking out of the wood grain. We realized then that after years of shooting at this site, there had been multiple rounds that were dropped and never recovered. The "pops" we were hearing were live rounds exploding under the heat of the fire.

In 2010, then Governor Brian Schweitzer, came to Makoshika State Park as part of the ceremonies for the annual Buzzard Day celebration. The governor arrived and was swarmed by people who wanted a quick selfie or to shake his hand.

As everyone was mixing and mingling, two dogs suddenly started barking and wailing as though their lives were in danger. Adults and kids were screaming as they scattered. The owner was finally able to pull her dogs away to reveal the source of the commotion. Tucked back under the edge of a display table was a young boy who had grabbed a black bear hide from the display table, gotten down on his hands and knees and draped the hide over himself so he looked like a bear. He had attempted to sneak up on the dogs to see what their reaction would be. Needless to say, it was much more than the boy had expected and we were lucky that despite the incredible commotion, no dog or human had been hurt.

In addition to these three stories, through the years I have weathered lightning storms, been caught in hail storms, been bitten, been threatened, responded to fires, fallen into ravines, got stuck in a blizzard, was attacked by wasps, fell through lake ice, found lost hikers, grabbed by the long talons of an owl and sprayed by a skunk just to name a few. But I have also had the "wow" moments - those times when everything went great. Those are the best memories that keep me in this job I love.

The great news for you is that there are literally a million experiences that you can have and many of them will certainly lead to your own stories that can be shared for years to come. The only thing left for you to do is get into the outdoors. Go camping, boating, hiking, fishing, walk your dogs, take your kids, hold the hand of the one you love and just go. If you get yourself out into the outdoors, I am certain that you will have the best experience to share at the next gathering. The best stories always involve the outdoors around our wild spaces.