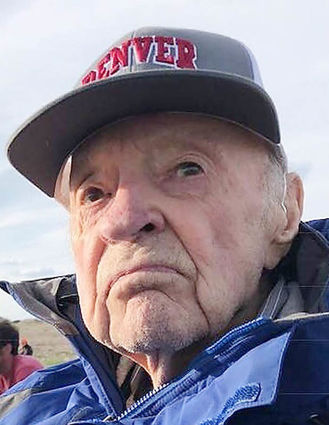 The oldest of five children, Riley was born on March 22, 1920 to Clarence Riley Sr. and Florence (Holyoak) Hensley at Cascade, Mont.

He graduated from Cascade High School and earned a bachelor's degree in Agriculture Education from Montana State College. Riley and Laro Eugenia Blevins were married on Christmas Eve, 1942 in Bozeman, Mont.

They lived in St Ignatius, Mont. for one year and then moved to their homestead farm west of Fairfield. Riley taught Vocational Agriculture programs in Power and Fairfield. He built the Fairfield Potato Warehouse and was the first to ship out a load of potatoes. He started the first Annual Junior Livestock Show in Teton County and founded and served as president of the Montana Swine Growers Association. He was a member of Choteau Masonic Lodge #44 A.F. & A.M.

After moving to Missoula, he owned several businesses. His passion was auctioneering and he helped many individuals and organizations at benefit auctions.

He retired to Seeley Lake where he enjoyed creating treasures in his workshop. He followed sports especially those where his family was playing and was delighted to attend an Atlanta Braves game, a St Louis Cardinals game and a NCAA Championship game at Denver University. Of course, the best was fishing – day or night and all year round.

He was preceded in death by his wife Laro in 2011, his sisters Rowena Reno, Lucille Gamradt and his brother Leroy Hensley.

At Dad's request, there will be no funeral but rather a celebration BBQ in Seeley Lake with Montana beans, Cowboy Coffee and laughter on Aug. 1, 2020.

Online messages for the family may be left at the Buffalo Hill Funeral Home in Kalispell (www.buffalohillfh.com). If you wish, donations in his memory to your favorite youth program would be appreciated.