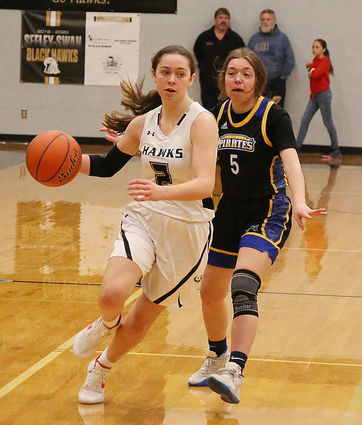 Freshman Emily Maughan outruns a Pirate down the court for an easy layup.

SEELEY LAKE – The Lady Blackhawks and Blackhawks both head into this week's District 13-C Tournament seeded in the top spot.

The Lady Blackhawks wrapped up their final week of the regular season with a pair of victories defeating Darby on the road Feb. 14 and Victor at home Feb. 15 while the Boys split the week falling to Darby and defeating Victor.

Klaire Kovatch led the Lady Blackhawks against the Tigers scoring 19 points. Kovatch and Emily Maughan each had one three-pointer while Kara Good had a pair of them.

While the competition was light in Darby the Lady Blackhawks found even less taking on the Victor Pirates. They held them to just two baskets and two free throws for a final score of 61-6.

Bertsch led with 18 points including hitting 8 of 8 from the free throw line. Kovatch wasn't far behind with 16 points.

The Blackhawks fell behind Darby early in the game and couldn't stage a successful comeback. The final score was 41-51.

Three Blackhawks scored into the double digits with Dakota Wood leading with 13 followed by 12 from Brayden Rodriguez and Walker McDonald with 10. Wood and McDonald were 2 for 2 from the free throw line helping push the team's free throw percentage for the game up to 75 percent.

Victor put up a good fight in the first quarter but by half time the Blackhawks were able to build up a 12-point advantage. They fended off the Pirates in the second half to a 57-40 victory.

Quinlan Ream led the Blackhawks with 19 points including three three-pointers followed by Rodriguez with 17, Wood with 10, Chase Haines with 6 and 5 from McDonald.

Sophomore Chase Haines sends in 1 of his 2, three-pointers against Victor.

This week the Blackhawks and Lady Blackhawks head to Frenchtown for the District 13-C Tournament. Being the top seed gives both teams a bye in the first round. The Lady Blackhawks's first game will be Feb. 20 at 2:15 p.m. against the winner of Lincoln vs. Valley Christian. The Boys first game is Feb. 20 at 4 p.m. against the winner of Victor vs. Valley Christian. See Cory's Valley Market's ad on page 16 for the tournament brackets.