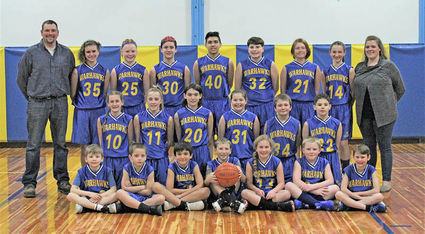 SWAN VALLEY – Swan Valley Elementary Warhawks closed out their season second in the Blackfoot Valley League with their only losses of the season from Helmville. Head Coach Chris Auchenbach is proud of his players and all the team has accomplished, including the little things like achieving a new skill and their first basket in a game.

This year the Swan Valley Warhawks had 20 players, third through eighth grade.

Auchenbach and Assistant Coach Katie Gleason's goals for the season: learn the basics of the game – rules, form and positioning; enjoy playing; and push players harder than they think they can push themselves. Auchenbach said the players have all gotten into better shape, improved on the fundamentals of dribbling, passing, pivoting and started to work on boxing out.

Instead of everyone getting equal playing time, the coaches rewarded those who showed up and worked hard at practice more playing time.

"The people that work hard earn the right to play in games," said Auchenbach. "[The last home game] We put everyone in because everyone was working hard this week."

"I'm proud of them. I love them all," said Auchenbach. "They all worked hard."

Morgan, who had never played organized basketball before, told Auchenbach on the first day of practice that she couldn't dribble left-handed.

"I told her by the end of the season you will be able to dribble left-handed," said Auchenbach. "She came to me about two weeks ago and said, 'Look at me. I can dribble left handed.' It is all about those little moments."

Another moment the crowd experienced Wednesday night when seventh grader Angela Ream made her first basket in a game.

"What a blessed moment to see her get a basket. Hopefully it rewarded her for the hard work she has put in all season," said Auchenbach. "The little moments are my favorite. Watching a kid make their first basket [in a game] is so special to see since that only happens once in their life."

When their last home game against Elliston was canceled, Auchenbach reached out to Brett Haines to see if Seeley Lake Elementary Eagles would be willing to come and play Wednesday, Jan. 29.

Even though SLE is not in the Blackfoot Valley league, one of their games had been cancelled so Haines accepted the invitation. He brought his A and B squads for two games.

In the B squad game, the Eagles made a come-back from 10 points down to tie it up 20-20. The coaches agreed to a two-minute overtime. Jezzy Palmer dropped one in for the Eagles in the first minute.

The Warhawks continued to get the ball down to their end of the court. Cameron Hadley sunk one of his free throws putting them within a basket for the win.

In the final seconds of the game, Levi Boyd shot and his teammate Tyler Brady got the rebound. He stepped out to the side and took a shot. It hit the backboard and then double bounced on the rim. The buzzer went off as it fell through the hoop for the win. The final score was 23-22.

"A couple of kids almost cracked under pressure and they didn't," said Auchenbach who couldn't quit smiling. "I haven't ever heard a game that loud. That was louder than high school games."

Seventh grader Angela Ream made her first basket after sinking a free throw against the Eagles.

Levi Boyd and Brady led the scoring with eight points each. Laciey Auchenbach also put up six with Hadley adding one free throw.

The Warhawks swept the A Game winning 43-20. Kauffman led the Warhawks scoring 15 points. Aubrey Matthew also made it into the double digits with 11. Also scoring Mauldin, 8, Darby Gleason, 4; Lilly Boyd, 2; Rilyn Richardson, 2 and Ream, 1. Auchenbach noted that Matthew and Boyd also play for SLE so the Eagles were down two of their guards for the game.

"I'm proud of the kids. They showed up and worked at practice," said Auchenbach who added he appreciated all the community support throughout the season. "A lot of these kids will go on to play basketball and some of them won't. We are just trying to give them the experience of what it is and a happy moment."