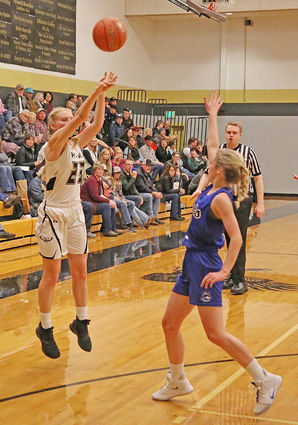 SEELEY LAKE – It was open season on cats for the Lady Blackhawks as they decimated the Clark Fork Mountain Cats Jan. 31 and the St. Regis Tigers Feb. 1. The Boys lost a tight game with Clark Fork and then fell to St. Regis.

The Lady Blackhawks were on fire on the home court as they took on 13C's number two ranked Mountain Cats shooting to a 14-4 lead in the first quarter and finishing them off 56-22. The Ladies had 27 steals in the game including six from Sariah Maughan.

Aspen Conley led the Lady Blackhawks hitting 81 percent of her shots for 13 points. Emily Maughan and Klaire Kovatch also scored into the double digits with 12 and 10 points respectively.

The Lady Blackhawks treated the Tigers to a similar whipping the following night taking a wide margin in the first quarter of 21-7. The Tigers put up a little more fight at the end but it was not enough to come even close to the Lady Blackhawks. Final score was 60-36. Sariah had 6 steels again while the team had 28.

All 14 Lady Blackhawks on the bench saw playing time and 13 of them scored against the Tigers. Kovatch and Sariah led with 11 and 10 points.

The Boys had a hard fought battle with the Mountain Cats trading the lead back and fourth through the first half. In the third quarter the Blackhawks came out ready to win holding the Cats to just one while putting up 11 but that would soon evaporate in the final frame.

As the clock ran down the Cats tied up the game at 27-27 with less than a minute to go. The Cats ran down the clock and then drove to the basket to take a final shot but the Blackhawks fouled them.

A free throw put the Cats ahead leaving the Blackhawks just 3.4 seconds to make their final move. The ball was passed inbound to Quinlan Ream who made a quick pass to Dakota Wood who managed to fire off a final shot from just across half court but it didn't hit its mark. The Blackhawks fell 27-28.

Walker McDonald and Ream led the Blackhawks with 8 and 6 points.

The Blackhawks came out strong against the St. Regis Tigers taking an early lead and extending it to eight points by the half. 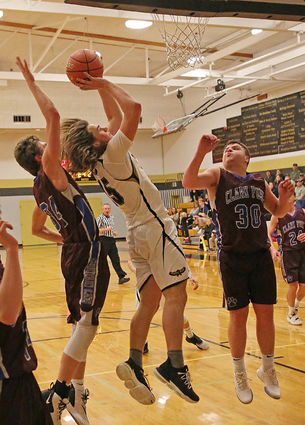 Sophomore Walker McDonald goes for 2 of his 8 points against the Mountain Cats.

The Tigers had different plans though and came into the second half shooting. They punished the Blackhawks from the free throw line in the third quarter hitting eight of nine attempted and rallied to put the Blackhawks eight points behind by the final frame. The Blackhawks couldn't recover and fell 49-64.

Ream led the Blackhawks with 20 points including three three-pointers. Wood also scored into the double digits with 13.