The love of the game 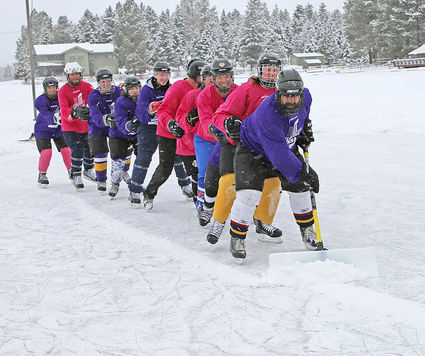 Multiple Scorgasms and Home Dressers made a conga line to shovel the ice after they finished their final game against each other Sunday, Jan. 12. The majority of the teams hail from Bozeman however players flew in from Georgia, New York, New Jersey and Costa Rica. They all stayed at The Lodges over the weekend. "It is all about having fun," said Nancy-Clair Laird from Georgia who has played in the tournament for eight years. "Play like a little kid," was the advice the Home Dressers told others who were frustrated with the ice. – "Kids don't care if there is a puddle or if the ice is rough, they just want to play and have fun."

SEELEY LAKE - "Montana, winter, pond hockey, love - That is what this is about," said Seeley Lake Pond Hockey player Brian Jon Zimmer as he walked off the ice following his last game Sunday, Jan. 12.

Many other tournament veterans echoed their love of the tournament and offered accolades and appreciation for the work and dedication the Lindemer family and all the volunteers put in every January for the annual tournament.