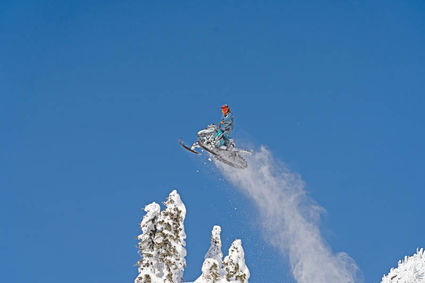 Seeley Lake native Caleb Kesterke is air borne after hitting a jump. Backcountry free style is a riding style that he continues to practice and strives for greater heights. Large jumps take constant calculations and intense focus while producing a condensed rush.

SEELEY LAKE – When Seeley Lake native Caleb Kesterke was paid to offer snowmobile riding clinics in Russia this past November, his dream of making money riding snowmobiles took another jump towards reality. As the youngest backcountry rider sponsored by Polaris, Kesterke has spent years to reach this point and hopes to turn his passion for snowmobiling into a career through hustle, dedication and perseverance.

Kesterke, now 22, started shooting photographs and videos of himself snowmobiling in the backcountry when he was 14-years-old. He would set up a tripod and take all his own shots. He posted his shots and video snippets on social media. Through consistently posting unique content and through word of mouth, he started to gain a following.

When he was a teenager, Kesterke focused on technical tree riding. However after riding with different riders and traveling more, he developed more skills for jumping and backcountry freestyle riding.

"Being good at one thing isn't enough," said Kesterke. "It's a small industry and if you want to make it anywhere, you have to be the best at everything, not just one part of back country riding."

Kesterke explained backcountry free style riding "that style of riding where you're in the air doing something unique."

"In the back country, every single jump is different. You can't even hit the same jump twice and have it be the same because of the way the snow changes," said Kesterke. "So that it adds a lot of calculations that you have to do on the fly."

Kesterke worked with a few different film companies but also continued to improve his own filming by purchasing better gear, producing higher quality films and having friends and his brother Isaac film him. He also added Instagram to his social media platform to increase his exposure to his target generation, 14-30-year-olds. When something he posted went viral, he gained followers.

Kesterke's three main sponsors this year are Polaris, 509 and GGB Exhaust Technologies, Inc. He is actively involved in those companies, promoting their products through content, reviews and exposure. Kesterke has also shot commercials for Polaris, done photo shoots and will do signings as a Polaris backcountry athlete at different events.

Kesterke said the Russian snowmobile community follows social media very closely. They had watched Kesterke's videos. Once the Russian Polaris Distributor found out he was riding for Polaris, they told Polaris they wanted him to come and teach clinics.

This past November, the Polaris distributor in Russia hosted Kesterke to teach basic riding skills through clinics to recreational Russian riders. He was provided a sled, a translator and all his expenses were covered in addition to being paid to teach. He said it was some of the most amazing hospitality he has ever received.

"It was very surreal just to be traveling that far away from home and people knowing who I was and wanting to take photos with me and sign things. That happens in the US but not to that level," said Kesterke. "The fact that was happening across the world and to do what I love and to make good money while doing it is definitely a unique experience."

Kesterke enjoys teaching clinics because it is an opportunity to meet a lot of people that have a similar passion for the sport and teach people things he's learned.

"If someone's ready to learn, it's one of my favorite things to try to teach them something new on a sled," said Kesterke.

This was the first time Kesterke made money riding. While he has had sponsors since he was 16-years-old that helped cover expenses, his day job is working construction in Missoula.

"To go basically five years with no financial benefit is hard but if it's what you love doing you're going to do it anyway," said Kesterke.

Kesterke said while his riding ability and self promotion of videos on social media helped gain sponsor's attention, it was also his reputation and the relationships he has built in the industry that has helped him gain traction as a backcountry rider. It was through a relationship with one of the lead marketing guys at 509 that Kesterke landed him the Polaris sponsorship.

"He recognized my work ethic and what I'm trying to do and he recommended me to Polaris," said Kesterke.

Kesterke said he averages 70-100 days riding a year and puts in 10 hours a week at the gym. Being stronger and in good shape, helps set his style apart from other riders.

"It allows me to do tricks differently because I'm not relying on the sled to do them," said Kesterke. "I just force the sled to do what I want it to do."

Kesterke said the flip variations he does in the backcountry have started to pull in more of the non-industry audience that up to this point has been a challenge to reach.

"Tree riding is not really cool to people who don't ride. You have to understand how hard it is to ride for that to be impressive," said Kesterke. "But if you do a back flip over a cliff or something like that, anyone will find that impressive."

The majority of his time off-snow is spent fixing and maintaining snowmobiles and editing photos and videos to post them on social media or sending them to sponsors or filmmakers for movies.

Kesterke hopes his love for snowmobiling turns into a full time career. He is working on starting his own business within the snowmobiling industry offering clinics, a merchandise line, industry products and producing YouTube episodes and possibly a full length film.

"I want to do what I love, make money doing it and have the freedom that that brings. Sledding is my lifestyle – it is already what I live for," said Kesterke. "So if I can turn that into a career, it opens up opportunities for other hobbies and a very unique lifestyle."

In addition to leading clinics in Russia and being the youngest Polaris backcountry rider, Kesterke also has taught riding clinics in Canada since he is dual citizen. He was named 509's Rider of the Year last year and he has a segment in 509 Film "Volume 14" along with seven or eight other riders. While getting to this point has taken longer than he thought, he realized that his original expectations of making money snowmobiling wasn't very realistic. 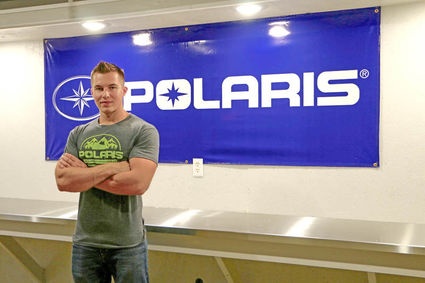 This is the first year Caleb Kesterke has received a Tier 1 sponsorship from Polaris. He is the youngest Polaris-sponsored backcountry athlete. Through his Polaris sponsorship, he was invited to Russia to teach riding clinics.

"The most successful guys have been in the industry for like 30 years," said Kesterke. "I knew my skill was close to theirs but that wasn't enough. You need a history in the industry and reputation and that comes with time."

When asked what he would tell others from small-town rural Montana about pursuing their dream he said, "Seeley Lake is a small town but the Internet is big. You have just as easy access to the Internet as anyone else in the world," said Kesterke. "In this day and age, social media is king and you can do just about anything you want utilizing social media as an aid for it."

The Seeley Swan Pathfinder first caught up with Caleb Kesterke in April 2014 when he was 16 after he won his first video competition. To read the full story visit http://www.seeleylake.com/story/2014/04/17/news/teens-hobby-documents-passion/5582.html