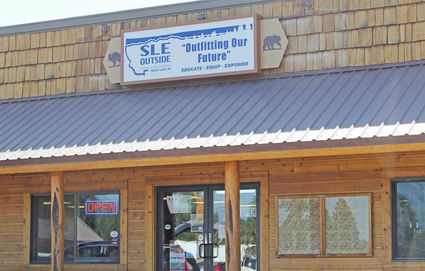 The SLE Outside Store moved out of their retail location in the Bison and Bear Center in late summer of 2017.

SEELEY LAKE – Questions over where SLE Outside Store's inventory went after the Store was closed has led to former Seeley Lake Elementary Superintendent Chris Stout paying SLE for items sold through an eBay account.

In July 2017 Stout told the Pathfinder that the inventory would be sold during clearance sales or sold online following the closing of the Store's retail location. With the Rice Ridge Fire essentially shutting down retail business in Seeley Lake, no clearance sales were held before the Store vacated its retail location at the Bison and Bear Center in September 2017.

The Pathfinder asked the SLE School Board what actually happened to the unsold inventory at the June 25, 2019 special board meeting. This was the same meeting the Board accepted Stout's resignation.

SLE Clerk Heather Mincey explained that the value of the inventory including rental gear was approximately $38,000 when the store closed. SLE still has possession of the rental inventory including paddleboards and kayaks. The remaining merchandise was sold in the fall of 2017 at a sale held at SLE. Mincey said what was leftover from the sale was donated in Missoula but she didn't know exactly where.

The Pathfinder questioned if the Board knew anything about an eBay account that appeared to be selling items similar to the Store's inventory including Patagonia clothing, MSR stoves and Bozeman Reel Company reels. Items were listed as shipping from Seeley Lake's zip code and the account appeared to belong to Stout with the name christou_50. It was created in November of 2017 and was actively selling merchandise in May of 2019. The limited history available publicly on eBay showed the account had sold hundreds of dollars in outdoor gear.

Stout was not in attendance at the special meeting. Following the meeting, the Board forwarded the information on the eBay account to Attorney Elizabeth Kaleva with instructions to look into it.

In an email to the Pathfinder, Kaleva reported that she contacted Stout to discuss the eBay account. The account did belong to Stout and he stated that some of the products were SLE property that he had listed to liquidate.

Stout gave Kaleva access to his account along with information on items listed showing what was SLE property. Stout agreed to pay SLE for the inventory he said belonged to SLE. Mincey confirmed that SLE has received $2,860 from Stout for the inventory.

Kaleva wrote that Stout no longer has possession of any Store inventory that has not been paid for after the reimbursement.

According to Kaleva there is no way to independently verify what items belonged to the store because there was no accurate inventory of items sent to the Store or sold by the store since its inception. Kaleva couldn't provide the Pathfinder with an actual list of what Stout reimbursed SLE for, however, she wrote that what he paid is close to the total amount of new Patagonia brand items sold on the eBay account.

In response to speculation that SLE lost a significant amount of money in the Store Kaleva wrote, "I realize this is a mess for the community, but there is no inventory or any sort of accounting for the Store so there is no other way I have to find out where all of the money went. The only thing I was charged with doing was looking at [Stout's eBay] account if he would let me (he did) and see what looked like [SLE] stuff."

At the Dec. 16 SLE board meeting, board member Todd Johnson, who was the board chair during the operation of the Store, said in hindsight the Store was run loosely with the school having little retail sales experience. Looking back there were other things SLE could have done but at the time there was a lot of people who bought into the concept of the Store.

Johnson reiterated that the funding used for the Store was not from SLE's general fund. SLE's portion of the money used to start the store and to fill in the losses came from renting the school's facility to the Morrell Complex Fire camp in 2015 and the Rice Ridge Fire camp in 2017.