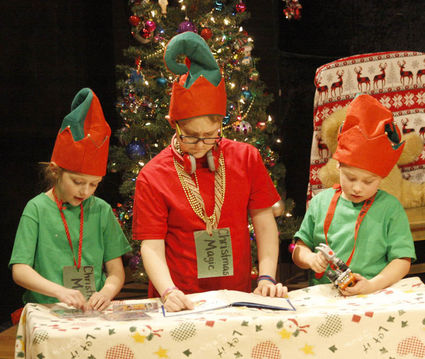 GREENOUGH - The Reception Barn at Paws Up Resort was the site of Sunset School's Dec. 19 holiday play, "A Little Elfin Magic." Dressed in Christmassy reds and greens, all 13 students, from kindergarten to seventh grade, played elfin parts.

The central dilemma of the play is that the toy-making elves have not awoken in time to make all the toys needed for Santa's delivery. Though blaming and complaining initially, eventually the elves all decide to give up the toys they hoped to get for themselves and add them to Santa's pack instead. In the end it turns out all the problems were caused by one greedy elf who planned to advance in the ranks by making the other elves seem incompetent. Inspired by the generosity of his fellow elves, in the true Christmas spirit, even he repents in the end.

At the reception afterwards, proud parents gave their critique of the performance using words like "marvelous!" and "wonderful!" One godmother even said she teared up, she was so proud.

Holly (Sera Benton - far right), Carol (Amelia Hurst), Garland (Aiden Eichenlaub) and Fruitcake (Jadesa Stevens) listen as Berry (Sam Welch) admits he has been kicked out of all the other departments he was assigned to because they thought he was a spy. Expecting to be treated meanly by the elves in the toy-making department too, he is overjoyed when they accept and encourage him instead. Though they have all decided – reluctantly – that instead of using their Christmas magic credits to get themselves toys they had been saving up for, they will use the credits to get more toys to fill Santa's pack. Berry is even more astounded when they tell him since he didn't help cause the problem he doesn't have to give up his credits.