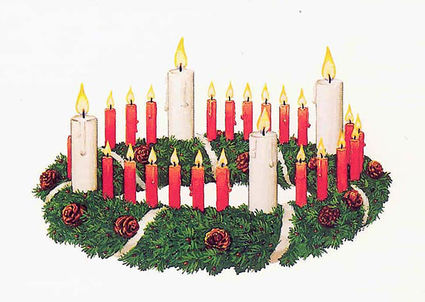 Advent wreath, aka Adventskranz in its original design 1839, designed by Johann Hinrich Wichern.

Part I, "Candles and Festivals of Light," recounted Christian, Jewish, Hindu and African-American winter festivals formulated around the theme of light conquering darkness. Those celebrations transcend national boundaries. Part II will look at celebrations involving light and candles but carried out on a smaller, more national or regional scale.

One candle ceremony performed in churches, but also by many Christians in their homes, is the lighting of the Advent Wreath. Though the symbolism of Christ as the Light of the World driving out darkness is a part of the underlying analogy, the primary emphasis is on waiting, anticipation and preparation. Advent means "coming" and the Advent Wreath helps Christians focus on the coming of Jesus on Christmas Day.

Though types of Advent Wreaths vary, the wreath generally is made of evergreens formed into a circle (representing eternal life). Three purple candles symbolizing penitence and one pink are placed equidistant around the circle. Sometimes a white candle, the Christ Candle, sits in the middle.

The season of Advent begins four Sundays before Christmas. The goal is to prepare the soul over the four-week period to be worthy of the coming of Jesus, the Savior.

On the first Sunday, one of the purple candles is lit, perhaps accompanied by a Bible reading or the singing of an appropriate song such as "O Come, O Come, Emmanuel." (Emmanuel is a Hebrew name meaning "God is with us.")

On the second Sunday, the first candle is relit along with a second purple candle. Gaudete Sunday ushers in the third week with the lighting of the pink candle. Gaudete means "rejoice!" and it is as if the excitement of the sure knowledge that the birth of the Savior is near cannot help but break through the penitential somberness, though the fourth Sunday once again counsels restraint and humble preparedness. The white Christ Candle is lit on Christmas Day or in the church during Midnight Mass.

Though the symbolism of the Advent Wreath has ancient underpinnings, the wreath itself wasn't created until 1839 by Johann Hinrich Wichern. Wichern was a German Lutheran pastor who worked at a mission school. Throughout December, the mission children continually asked him, "Is it Christmas yet?" So Wichern took an old cartwheel, set it on its side and spaced four large candles around it. Between each set he inserted six smaller candles. Lighting one candle each day and the large candles on Sundays gave the children a visual to see how many weeks and days remained until Christmas. The concept caught on among other churches in Germany and came to America with German immigrants. Somewhere along the way the wreath evolved into its present, smaller, more ritualized form.

Certain candle ceremonies are specific to a region, though they may have been spread to other countries by emigrants. A major feast day in the Scandinavian countries, for instance, is St. Lucy's Day. Celebrated Dec. 13, it officially ushers in the Christmas season. In the old Julian calendar, Dec. 13 was the day of the winter solstice, celebrated with candlelight, lamplight and bonfires. The monks who brought Christianity to Sweden transfigured the light festival into a celebration of Santa Lucia. When the Gregorian calendar was adopted, St. Lucy's feast remained on Dec. 13, even though the date of the winter solstice changed to Dec. 22.

According to the legend, Lucy was a third-century martyr, killed for refusing to renounce her Christian faith. Lucy (which means "light" from the Latin "lux, lucis") brought food to Christians hiding in the Roman catacombs under the city. In order to free her arms to carry as much food as possible, she wore a candle-lit wreath upon her head.

In modern day celebrations, a young girl is chosen to represent Lucy. She wears a long white gown (symbolizing purity) with a red sash (the blood of martyrdom) and a crown of four candles on her head. She is usually accompanied by other girls dressed in white and holding a single lit candle. They sing a special song honoring St. Lucy.

Columbia also has a regional festival of light called "Dia de las velitas" or Little Candles Day which ushers in the Christmas season. It is celebrated on Dec. 7, the eve of the Feast of the Immaculate Conception. A public holiday in Columbia, the festival celebrates the Catholic Church's teaching that Mary, the mother of Jesus, was conceived without the stain of original sin. Candles or lanterns burn inside and outside of houses and even in street displays incorporating elaborate designs. Thousands flock to the larger cities where fireworks and other events provide entertainment.

The Irish have a simpler tradition which involves a single lit candle, or sometimes three lit candles, placed in the house window. During a time of religious persecution of the Catholic Irish by the Protestant British, the celebration of Mass was forbidden. Priests went into hiding to avoid being imprisoned or killed. During the Christmas season, a light shining from a window was a signal to priests that a faithful Catholic lived in that home. The priest then knew the family wished to receive Holy Communion and their door would be unlocked. In return, they would offer him safety and hospitality. When the British asked about the candle, the Catholic homeowner would respond that it symbolized their home was open to Jesus, Mary and Joseph unlike the inn at Bethlehem. Though the British considered it "silly popery" (i.e., superstitious belief promulgated by the Pope), it did not rise to the level of a crime and thus could be ignored. Even though Irish Catholics are no longer persecuted, many people still place a lit candle in their window at Christmas time to remind them to value their freedom of religion.

Of course, many people place candles around their homes during the winter holidays simply for decoration. Increasingly in modern times, lighting extends to outdoor decorations, some presenting quite elaborate displays. Though the practice may contain a small vestige of the symbolism of light overcoming darkness, more likely it has to do with extending the joy of the holiday season to neighbors. And in some neighborhoods, the displays are so extravagant that people drive for miles to see them. 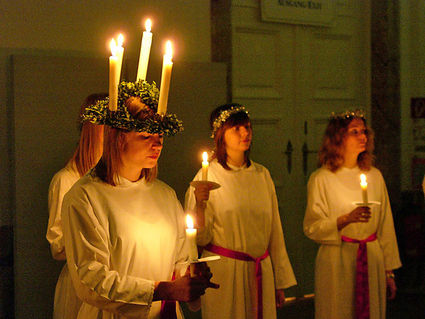