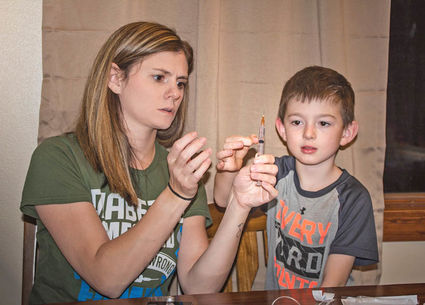 Chase Cahoon and his mother Bekah measure out insulin that he will inject into his insulin pump. He adds insulin to the pump and changes the needle site in his body every three days.

SEELEY LAKE – "Well it is not cancer but it is diabetes," the doctor told Bekah and David Cahoon after their six-year-old son Chase was rushed to the emergency room June 18, 2018. "This is something he will have for the rest of his life. There is no cure. They are working on one and they might have one in his lifetime."

Chase's blood sugar was 618 (normal is 100) and he was in diabetic keto acidosis (DKA). He spent three days in the Pediatric ICU getting out of DKA while he and his parents learned how to take care of him. Now, a year and a half later, the Cahoon family is still learning h...