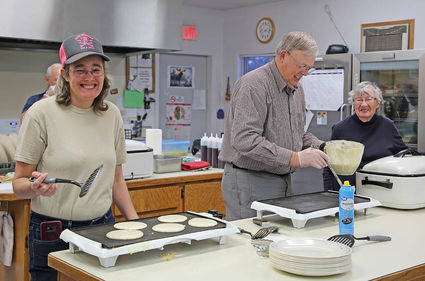 Jennifer Patchen and Pat Trudeau cooking pancakes at the Seeley Lake Senior Center Hunter's Breakfast. Senior Center President Boyd Gossard said it was a slow year for the breakfast this year serving only 80 people compared to the usual 120. He thanked everyone who donated to the silent auction and everyone who attended as well as the Seeley-Swan High School Leos Club for their help. Samantha Arroyo won the 50/50 drawing.

Region-wide, hunter harvest and participation was comparable to last year's opening weekend, with a few hot spots. At the hunter check station near Darby, FWP saw 1,012 hunters, the highest total since 2015, and 73 elk--the highest since 2011.

The elk harvest of 16 reported at the Bonner check station was the lowest since 20...