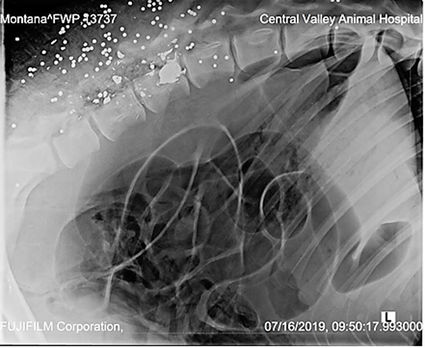 An X-ray of a black bear shows fatal shots from a shotgun severely injured the animal, which was euthanized.

On July 15, Montana Fish, Wildlife & Parks received a report of an injured black bear dragging its lower body in the foothills of Kila. The following morning, the bear was euthanized because of its injuries.

Veterinarians at Central Valley Animal Hospital X-rayed the animal and discovered it was shot with birdshot and likely a pistol. The trash contents in the bear's stomach indicated that it had visited a residential garbage can. The birdshot pellets broke several vertebrae in front of the bear's pelvis and inflicted extensive damage to the soft tissue surrounding the area. According...