Pioneers setting it up, making it happen 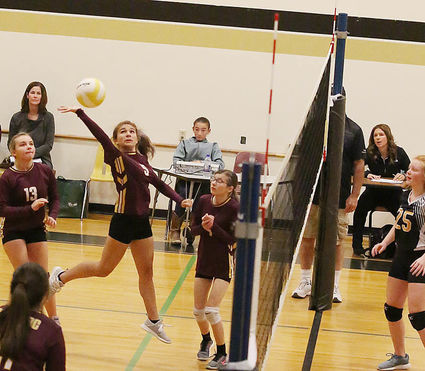 Potomac eighth grader Penelope Russell goes up for a spike in the game against Seeley Lake. The Pioneers A Team won each set in the match against the Eagles Oct. 8 25-14, 25-15 and 15-6.

POTOMAC – The Potomac Pioneers girls volleyball team is having a great season this year with only two losses in their eight games. With four eighth graders on the 14-person team, Assistant Coach Kyla Nelson said they have strong leadership, are learning to work together as a team and are learning the fundamentals of the game.

Nelson said they have been focusing on fundamentals: placing their feet and the swing for passing; getting their hands and feet in place for setting; and the approach, wrist snap and follow through for hitting.

"Super basic things so if they want to play in high school they have that good solid base," said Nelson.

Communication has been a challenge this season but the coaches said they are working on creating an atmosphere for encouragement and teamwork. Head Coach Christi Taillefer said the players have been sticking together and helping others who may be having a hard time.

Most recently, the Pioneers have been focusing hard on their serves, as well as using all of their hits.

During the A game against the Seeley Lake Elementary Eagles, it all came together. They won all three sets.

"It was wonderful to see the girls' skills really playing out in the game," said Taillefer.

The Pioneers have only lost to St. Joes and Target Range.

"This is great improvement from last year and I am excited to see how we do at the tournament," said Taillefer.

Both Nelson and Taillefer agree that the eighth graders have really stepped into a leadership role. Taillefer specifically highlighted a few girls that have really progressed this year.

Taillefer said eighth grader Lauren Nordberg has always been a great leader and optimist for the girls. Seventh grader Lily VanGrinsven has really come out of her shell this year and has been a great addition to the A-Team. Then there is also sixth-grader Kaycee Salter who has progressed in her abilities enormously and has become a great aggressive asset to her team.

"This season the girls have done well at being team players and supporting each other on and off the court," said Taillefer.

While they don't keep a lot of statistics on the games, Nelson said they do keep track of aces and mis-serves. When the mis-serves are higher than the aces, the girls run laps the next day in practice.

"It is a great training tool," said Nelson who explained that the girls had more aces than mis-serves during the game against Seeley Lake so they wouldn't have to run the next day.

Potomac eighth grader Lauren Nordberg goes up for one of her kills against the Eagles Oct. 8.

Taillefer has enjoyed having Nelson as an assistant coach. Nelson has been playing volleyball since fifth grade. She is currently a senior at Big Sky High School and is coaching at Potomac as part of her senior project. She hopes to go to school to become an elementary school teacher.

"Volleyball is something I know inside and out so I can help pass along that knowledge as well as gaining some feeling of what it would be like to be a teacher," said Nelson. "This is really fun."

"It has been amazing working with Kyla. Her skills and knowledge of the sport (which I have a limited amount of) has been a tremendous help to our team," said Taillefer. "She loves the game, does great with the girls, and is 100 percent of an asset to our team. Without her we might not be doing as well as we are. She truly is a fantastic coach."

The Pioneers are off to face St. Joe's Oct. 10. The Copper League Tournament is Oct. 12 in Frenchtown.