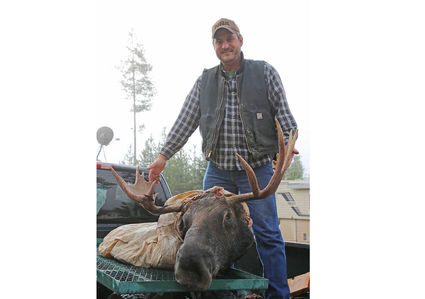 Austin Dillree with his 40-inch bull moose that he harvested in the Boles Meadow area Thursday, Sept. 26. He is having a European mount done by local taxidermist Rob Henrekin.

SEELEY LAKE – After 24 years of putting in for a moose tag, Austin Dillree finally got his chance. Less than two weeks into the two and half month moose season, he filled his tag with a 40-inch bull that he dropped with one shot in the Boles Meadow area.

Dillree's first memory of hunting was riding on his Dad's shoulders when he was four-years-old. He started hunting himself when he was 12 and has made it a lifetime sport hunting elk, deer and antelope.

"I love the solitude," said Dillree. "I live for this time of the year."

Even though he enjoys hunting with his daughters and some fri...