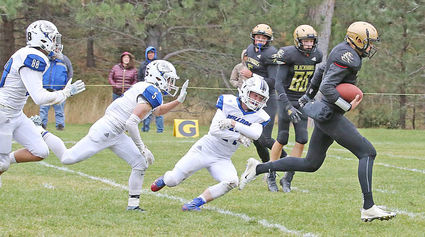 SEELEY LAKE – The Blackhawks took on the Bulldogs of St. Ignatius for their Homecoming Sept. 28.

The game was a hard-fought battle in the first half with neither team's offense being able to move the ball very well. With just four minutes left in the half the Bulldogs scored a touchdown. The Blackhawks broke up the conversion.

A half dozen plays later, the Blackhawks scored a touchdown of their own. Caleb Maughan had a great kick return followed by a couple of runs and a couple of pass receptions to set up the scoring play. Owen Mercado took it the final 21 yards.

The teams headed to the...