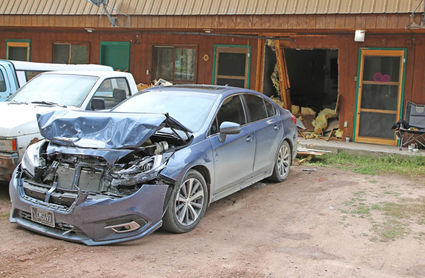 This 2018 Subaru was hit with a pickup and pushed into the front wall of the Wolf Ridge Apartments Saturday morning, Sept. 21. While two people were in the apartment, no one was injured. One man is in custody.

SEELEY LAKE – Saturday morning, Sept. 21, when his older brother wouldn't answer the door, Timothy Pratt allegedly drove his truck into his brother's car, parked in front of the Wolf Ridge Apartments, and pushed it into his brother's apartment. While the brother and his girlfriend were inside at the time, no one was injured. Pratt faces several charges including two counts of felony endangerment and criminal mischief.

According to court documents, around 10:15 a.m. Sept. 21, Pratt showed up at Wolf Ridge Apartments. When his brother wouldn't answer the door, he tried to kick in the door....