Montana is the oldest state in the West. Demographics tell the tale 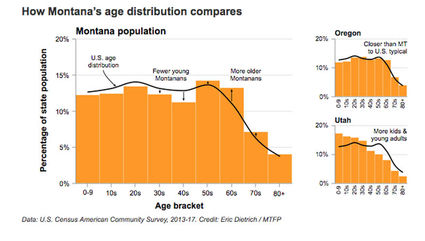 Montana's age distribution as it compares to Oregon, Utah and the National average.

HELENA - Montana is, in fact, a country for old men, and women too, according to demographic statistics from the U.S. Census Bureau, which indicate that based on median age, Montana holds the distinction of grayest state in the west.

And certain stretches of the state - including many but not all rural counties - have considerably older residents than Montana as a whole. That state of demographic affairs has wide-ranging implications for regional economies, education systems, and health-care access.

"We've got this Baby Boomer bulge that's pushing into retirement as we speak," said Univer...