A view from Ground Zero 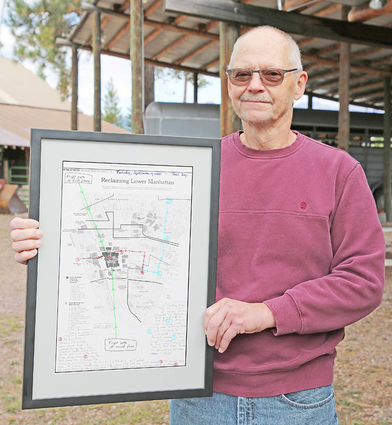 Seeley Lake's Tom Browder survived the Sept. 11, 2001 attack on the Twin Towers. He holds the map of his route and the key events of the day as recreated on a map published by the New York Times Sept. 13, 2001.

MANHATTAN, N.Y. – It was a beautiful September day as Tom Browder walked the final leg of his daily commute across the World Trade Center Plaza. As he stood at the foot of the North Tower, he heard what he thought was a bomb go off near the top of the tower.

Even though the concussion from the explosion knocked him to the ground, he was able to work his way through the World Trade Center plaza to the northeast corner of the complex.

“This is terrible but at least that is it,” thought Browder watching from across the street. “It was the second event that changed everything. That is...