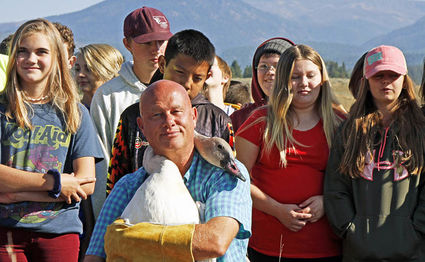 Junior high students from Seeley Lake Elementary School stand around Gary Wayne for a close-up look at a trumpeter swan. For about ten years Wayne has been driving a bus bringing students to the swan releases. It seemed like he ought to finally have a chance to hold one. Wayne said, "Holding the swan was a big honor! It's an elegant animal and having the head draped around mine was a lot of fun."

OVANDO – For 15 years, the Blackfoot Challenge and its partners have released fledgling trumpeter swans into the Blackfoot Watershed in a program aimed at restoring the swans to their native habitat. Next year could be the last year that happens. The goal was to get seven pairs of released trumpeter swans to return to the area, create a nest, produce eggs, raise their young and repeat the cycle for two consecutive years. According to U.S. Fish and Wildlife Service Montana State Coordinator Greg Neudecker, that goal has almost been reached. Speaking Sept. 5 on the shore of Rolling Stone R...