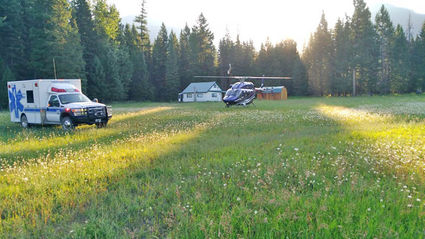 Swan Valley Emergency Services ambulance waits for the patient after Two Bear Air touched down at the landing zone near the Owl Creek Packer Camp near Holland Lake the morning of July 29.

SWAN VALLEY – On July 30 Seeley-Swan Search and Rescue was called just after 5 a.m. for a 50-year-old man that had reportedly eaten mushrooms on the trail to Upper Holland Lake and was violently ill. The 50-year-old had also sustained a head injury and was rescued by Two Bear Air just before 7:30 a.m. He was airlifted to Kalispell via Kalispell A.L.E.R.T. He condition is unknown.

Incident Commander Missoula County Sheriff’s Deputy Ryan Dunster said SSSAR got the call at 5:10 a.m. Tuesday. The man had reportedly eaten mushrooms found on the trail that were orange and brown on the top wit...