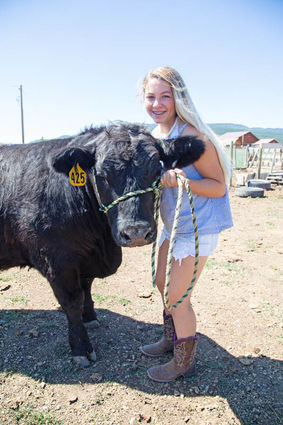 Dani Sexton is preparing to show her prime angus steer, Shaquille O'Neal, at the Western Montana Fair in Missoula Aug. 6-10. Shaq is her third steer project with the Seeley Lake Trailblazers.

SEELEY LAKE - Every night since October, freshman Dani Sexton spends nearly two-hours caring for her prime angus steer Shaquille O'Neal. She feeds him, walks him around the pen, bathes him and leads him into a chute to blow-dry him.

When she first got "Shaq" in October, he weighed nearly 660-pounds. This month he weighed nearly 1,290-pounds, just before the Western Montana Fair, Aug. 5-10. She hopes to have Shaq place in the most competitive weight class, which ranges from 1,300-1,375 pounds, at the fair this year.

"I've got a good feeling about this steer," said Dani with a smile.