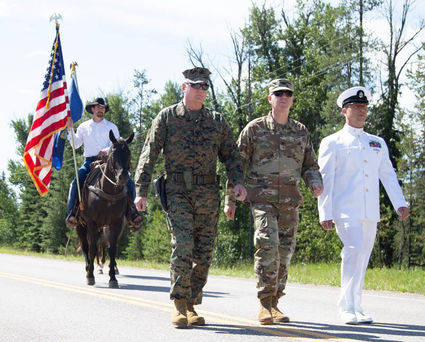 With the American flag flying behind them, Colonel Matthew Cooper (center) marches with other veterans leading the Condon parade during this year's Fourth of July celebration.

SWAN VALLEY – Even though he was recently promoted to U.S. Army Colonel, former Swan Valley resident Matt Cooper returned to his hometown to march in the Fourth of July parade. Cooper said since there is no active military presence in Condon, youngsters don't have a role model nor an understanding of all the opportunities available to them in the military. He marched, as he has done for the past 20 years, to show Condon children that a kid from a two-room schoolhouse can work his way up whatever ladder he or she chooses to climb and that the military has some ladders with great rewards no...