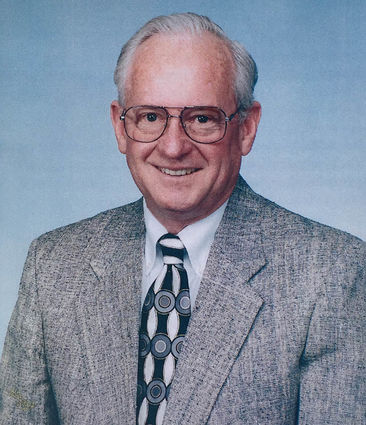 Dick was born on June 24, 1929, to Whitney and Marie Woodruff Reeve. His career in sales and management began during his early elementary years when he raised chickens for profit during the Depression. Throughout his life, Dick invested this attitude of self-motivated, entrepreneurial-energy to the good of his family and community.

Dick and Margo met on a blind date while he was visiting Cal Berkeley. His letters tell of many all-night drives back to Occidental College, arriving just in time to sleepily attend morning classes. They enjoyed 66 years of marriage.

After college, Dick enlisted in the Navy. Those two years of active duty were life changing. He credited the service for developing his organizational skills and self-discipline. After the Navy, he remained in the reserves, while beginning a lifetime career with Sears. He drove LA freeways to various store-assignments, allowing his family to remain established in their South Pasadena home for over 50 years.

Always active, Dick rigorously scheduled and maintained improvement-projects on their home and log cabin in Montana on Lindbergh Lake. He demonstrated his craftsman skills by converting an attic into a bedroom and also added a shop to their property. His numerous projects always received meticulous attention and he was famous for "doing things right the first time!"

Dick loved to plan trips for his family and friends. He enthusiastically taught his children outdoor skills and created vacations that shaped wonderful memories. Dick thoroughly enjoyed fishing, boating, skiing, golf and tennis. These activities infused his life with zest and joy.

He was particularly dedicated to cycling, riding miles every week until recently. He was a fitness role model who "got back on the bike" even after major injuries and heart surgery. He never stopped making goals, which he pursued with single-minded focus and stamina. Dick enjoyed many long-distance bicycle rides with his bike group. Dick volunteered to organize the trip's motel accommodations. He took pleasure in getting the best money-saving deals.

Dick served as an elder at Alhambra Presbyterian Church and was later employed as their Building and Property Manager. He loved the church and personal spiritual-formation was important in his life. Dick also served as a volunteer chairperson for the property committee at his new home at Royal Oaks. He is remembered for his loyalty and commitment to his family and community.