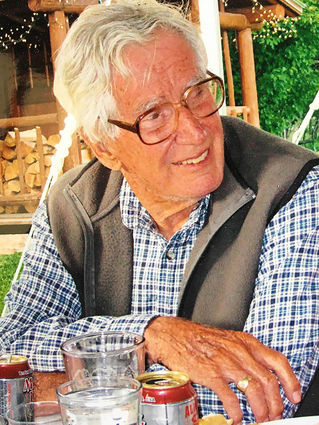 SWAN VALLEY - Robert Allerton Cushman, born Oct. 26, 1929 died June 23, 2019 following a slow decline at his home in the Swan Valley surrounded by his wife and 20 of his kids, their spouses and his grandkids. A giant of family, faith, science and nature, Cush, as he was known, led a full and pioneering life. He died the way he had lived: without fear, wrapped in the Holy Spirit, showcasing his strength, and with Sue, his wife of 67 years by his side.

Born in Cambridge, Mass. in 1929 as the youngest son of an Army officer, Cush lived in 14 places in the US before he graduated from Central Catholic High School in San Antonio in 1947. A lazy eye disqualified him from attending West Point as his father and brother had done, instead he enrolled at Massachusetts Institute of Technology. He graduated from MIT as a Mechanical Engineer in 1951. Displaying what was a life-long passion for deploying his keen intellect in the pursuit of problem solving, he embarked on a career in the bourgeoning field of nuclear energy.

He worked for Carrier Corp. in Syracuse NY, and Cambridge Corp in their field program and was present when the first hydrogen bomb was designed and tested at Eniwetok in the south Pacific in 1952. Two days later he married Susan Hooper in Honolulu.

In 1958 he graduated from The Oak Ridge School of Reactor Technology as a Nuclear Engineer. He worked at Martin Marietta in Baltimore, then Argonne National Laboratory in Idaho where he was part of the team that built the first boiling water reactor named Borax V. While in Idaho, Cush earned a master's degree in Mechanical Engineering and an MBA both from the University of Idaho. Meanwhile Cush and Sue also built a family; from 1954 to 1964 they had eight kids.

The Swedish Atomic Energy Agency then recruited him to help them design a similar reactor near Stockholm. With Tom, Curt, Mike, Barbara, Andrew, Rob, Doug and Erik in tow (ranging in age from ten and-a-half years old to six weeks) the family set sail on the first of many transatlantic crossings and spent two years in Sweden. In the winter of 1966 Cush skied the Vasaloppet, Sweden's national cross-country ski marathon. He finished the 90 kilometer course in just under 12 hours and the diploma he earned that day is the only one he has ever framed and displayed. At the end of that assignment the entire family spent nine weeks camping across Europe in a VW bus.

Back in the U.S., Cush worked for the US Atomic Energy Agency as an environmental engineer in Washington, DC. This was followed by a four-year stint at the International Atomic Energy Agency in Vienna, Austria as a safety inspector. In those four years he travelled to 23 different countries from Peru to the Philippines to Iran inspecting those nations' research reactors. In 1977, while living in Vienna, Cush and Sue bought property in Montana's Swan Valley.

The family then moved back to Idaho for three years, then returned to DC where Cush worked for the Nuclear Regulatory Agency, and his last professional post was at Niagara Mohawk Power Company in Syracuse, NY.

In 1990, at the age of 60, he and Sue retired to the Swan Valley. Having traveled the world, they knew paradise when they found it. In an ironic twist, after a career working for utilities, Cush promptly got to work engineering his own solar power plant at their new home.

For much of the past 29 years Cush was an active member of the community. He starred in the Swan Valley Players community theater productions, he was active in AARP and was a founding board member of the Swan Eco System Center. Cush took a special delight in making and serving huckleberry ice cream at the annual Condon 4th of July celebration. He and Sue were instrumental in the formation and construction of Our Lady of the Swan Valley Catholic Church. While he was physically able, Cush was frequently found having a beer and a sandwich on a trail high up in the Missions or the Bob Marshall. He and Sue took great pride in managing their forest property for timber harvest, environmental health and animal habitat.

The family would like to thank Cush and Sue's many neighbors and friends for their love and support over the years and especially the local caregivers who showed compassion and dedication above and beyond the call. Thanks is also due Partners in Home Care and their hospice workers.

Following a Mass for the family at home, Cush was buried on the property. Robert Allerton Cushman Jr. began the funeral procession on trombone playing "When the Saints Go Marching In."