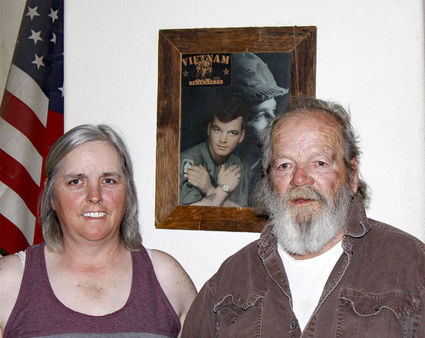 Dave Miller and his wife Marcy pose in front of the picture of 18-year-old Dave in his Army uniform.

OVANDO – Dave Miller joined the U.S. Army for altruistic reasons. As he explained, "I was reading and watching the news and stuff and I just thought Vietnam needed some help in their independence."

Miller was pretty sure he knew what war would be like. He had watched the TV segments. He was ready to face the hardships, and even possible death, for the sake of helping another country gain its independence as the U.S. had fought and gained its own independence. Instead he found his sense of right and wrong shaken to its foundations and replaced by a lifetime battle with PTSD.