The bears are out – Residents asked to secure attractants 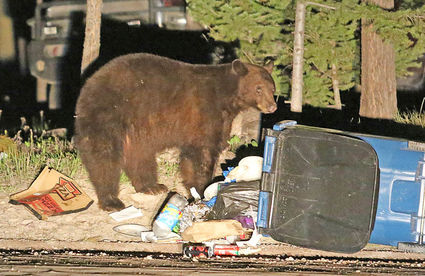 A black bear gets into an unsecured garbage can at a residence in Seeley Lake. Everyone is asked to secure all attractants to keep bears out of trouble.

SEELEY LAKE – There have been numerous reports of bear tracks and sightings in the area this spring. Last week Montana Fish, Wildlife & Parks Bear Biologist James Jonkel received reports of two black bears checking out residences on the Double Arrow, a grizzly checking out a residence at Clearwater Junction and another that got into garbage on Boy Scout Road. Jonkel reminds residents to properly store all attractants to keep the bears from becoming problem bears that need to be removed.

Jonkel received four reports of a large male black bear and a smaller black bear on the Double Arro...