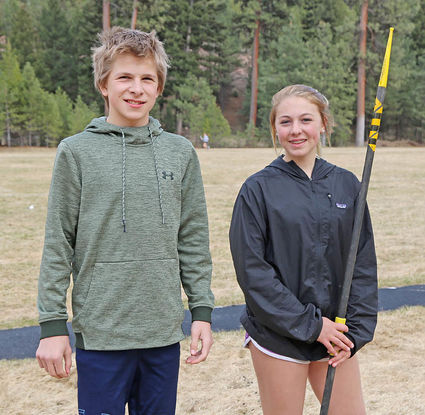 MISSOULA – Two Seeley Lake Elementary records fell at the opening Copper League Track and Field meet April 12. Eighth graders Dani Sexton and Wyatt Stout made it onto the record board in the javelin and 1600m.

This season, Sexton had her sights set on beating Klaire Kovatch's 2017 long javelin record throw of 93 feet, 3 inches set in 2017. At the first meet of the season, Sexton said she wasn't nervous and really wasn't expecting to beat the record. She knew she could throw farther than she did last year because she has been practicing a lot and running more.

"Running helps your legs get stronger and legs are very important in throwing," wrote Sexton in an email. "I was just gonna try my hardest and no matter what I got I would be proud."

When the guy running the event read her distance of 93 feet, 4.5 inches, Sexton was amazed she beat Kovatch's record by an inch and a half.

"I knew what the record was and I couldn't believe I actually broke it because Klaire is an amazing thrower and I look up to her," wrote Sexton.

"We knew that she could get that record and she did," said Head Coach Brett Haines. "Now the pressure is off and she can just throw and set a new goal."

Sexton's new goal is 100 feet by the end of the season. She also looks forward to working on her other events and continuing to set new personal records.

Stout's goal for the season was to beat Zach Nelson's 1600m record of 5:21 set in 2000. Being the first meet of the season, Stout was nervous because he wasn't sure about what the competition would be like. However, he had been running every day to get in shape for the season.

"When track came around I was already in pretty good shape," wrote Stout.

Stout said a boy from St. Regis started out really fast, so he followed him. While he hung within 15 feet behind him for most of the race, he finished three seconds behind him with a time of 5:16:34.

Stout was surprised when he met his goal at the first meet.

"When I broke the record I felt overwhelmed with joy," wrote Stout.

"I'm really pleased that he came out and set the 1600m record first meet," said Haines. "It came as a surprise that he got it first meet."

Stout's goal for the rest of the season is to keep improving his time.

"We will see where he can go," said Haines. "Hopefully, he can put that down a little bit lower this year. I'm really happy where Wyatt's at."

The next track meet for the SLE Eagles starts at 9 a.m. April 25 at Big Sky High School, Missoula.