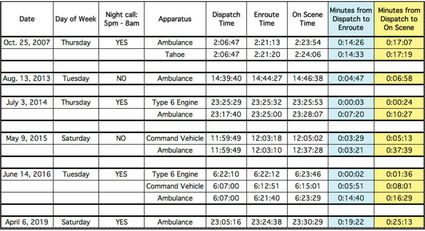 SEELEY LAKE – The family of Nick Beery addressed the Seeley Lake Fire District board regarding their concerns with the response they received to their home April 6. While the Beery family was grateful for the three volunteers who responded, they asked why the response time, qualifications and training of the volunteers and number of volunteers was so different from when they had called 9-1-1 in the past.

Barbara Beery read a letter to the Fire Board at their April 16 meeting during public comment. While she said she requested to be put on the agenda the Thursday ahead of the meeting, she was not listed.

Saturday, April 6 around 11 p.m. her husband Nick had a severe COPD flare up. She said it came on suddenly and with very little warning.

Beery called 9-1-1 at 11:04 p.m. expecting the same "quick, efficient response from trained, dedicated and caring responders" she had experienced at least five other times the Department responded to her home at 705 Tamarack Drive since 2007.

Beery called 9-1-1 one more time before directly calling a current Department volunteer and EMT, at 11:19 p.m.

According to the 9-1-1 Dispatch Log, the EMT was en route within 16 minutes of the call and the ambulance went en route to the call in a little over 19 minutes. The ambulance arrived at 11:30 p.m.

"If the three responders hadn't shown up the only other option would have been for us to wait for the Missoula ambulance [MESI] to arrive," said Beery.

Beery continued that once the responders arrived, it was clear none of them were trained for this kind of an advanced life support call, "but they did everything they could to give the medical attention he desperately needed, for which we are very grateful."

The responders made several trips to the ambulance for equipment, including oxygen. Beery gave them all of Nick's medical information. The Seeley Lake ambulance met MESI at Salmon Lake where Nick was transferred. While he was headed to Community Medical Center, since that is where his doctor, pulmonary team and medical records are, MESI made the decision to go to St. Patrick Hospital, "because they didn't think he would make it all the way to Community. Due to the chaotic transfer, the vial of life packet was not handed off to the Missoula ambulance. When he arrived at St. Pat's they didn't have his history, name and other information about him, he was just a man from Seeley Lake."

Beery compared this experience to historical response. She said in the past there were always four to six volunteers that responded quickly, were prepared and trained to help. Even if they weren't on call, volunteers responded in the past.

This time she said it was hard to believe that everyone on the Department was unavailable. She claimed there was not a medic on call that night and no ALS medic on call.

"We understand you need more volunteers and people with more training but people who sign up for this job know what it's about...saving people's lives," said Beery. "It is clear this department...had no back up plan at all. If we as a community can't count on the department, we need to start making backup plans for ourselves and our families."

According to the 9-1-1 dispatch log, response times to 705 Tamarack Drive between 2007-2019 varied from less than a minute to 17 minutes for the first responder to arrive at their residence. Volunteers on the ambulance responded to the weeknight calls in 17 minutes in 2007, 10 minutes in 2014 and 16 minutes in 2016.

The only other call on a weekend was in 2015. The Chief Bob Vanden Heuvel was on scene within five minutes of the call. The ambulance went en route in just over three minutes. Beery said the ambulance was right behind the Chief. The 37 minutes reported in the Dispatch Log was the time it took for the Seeley Lake ambulance to meet MESI at Nine Mile Prairie.

"The times can be debated all you want, we are not talking about response times, we are talking about the time from the first 9-1-1 call until getting my husband any kind of treatment or help. Bottom line is no one was there when we needed them and changes need to be made," said Beery. "We do want to acknowledge and thank the three responders who tried to assist but in the end it wasn't enough, my husband passed away. We don't want anyone to have to experience what we did. If speaking out will make this department more proactive and save someone else's life in the future, we have succeeded."

The board and Lane offered no response during public comment. Later in the meeting Board Chair Scott Kennedy said he would look into it and offered his condolences to the Beery family on behalf of the board.