Blackhawks off and running 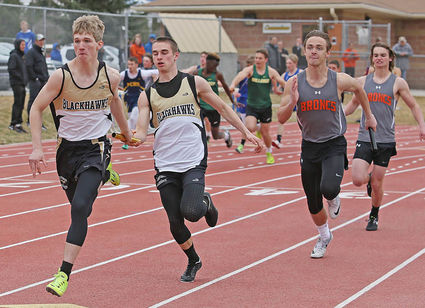 Dakota Wood hands off the baton to Soren Moon for the final leg of the 4x100 relay. Moon held off Frenchtown for first place.

MISSOULA - After two weeks of canceled meets due to the unusually snowy winter in Missoula and the Bitterroot, the track season finally got under way April 6.

The meet featured approximately 1,000 athletes from 28 teams across A, B and C class schools.

Despite the sea of athletes to wade though, the Seeley-Swan Blackhawks Boys placed fourth with 53 points while the Ladies took sixth with 40 points.