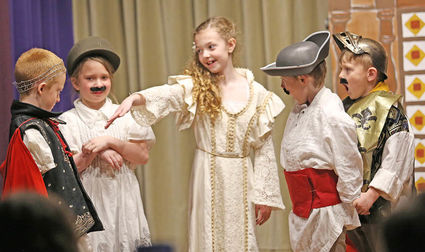 SEELEY LAKE – The Seeley Lake Elementary second graders wowed audience members with their memorized lines and acting ability as they performed "Twelfth Night" by William Shakespeare Wednesday, March 20. Second grade teacher Erin Lynch said it allowed her students to overcome a fear of public speaking and learned how to work as a team.

"Twelfth Night" has been one of Lynch's favorite Shakespeare plays because of the cases of mistaken identity and humor.

"Once I got to know the kids in this class I knew it would be a good match," wrote Lynch in an email.

The students did their first read-t...