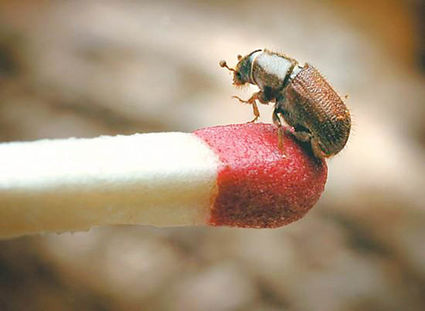 Bark beetles typically overwinter as larvae just below the bark of trees. Air temperatures define their emergence as adults, with Douglas-fir beetles typically beginning to fly around April 15, and mountain pine beetles between June 15 and July 1.

"Yes, the date is still April 15," I hear Leanna Grubaugh say down the hall.

Leanna may be our longtime Office Manager but everyone in earshot knows she's not talking about tax day. She's talking about another kind of deadline, determined by the time when Douglas-fir beetles take flight.

Douglas-fir beetles, along with the mountain pine beetles, are creatures we love to hate. With a shared genus name that means "tree destroyer" (Dendro = tree, tonus = de...