Plungers freezin' for a reason 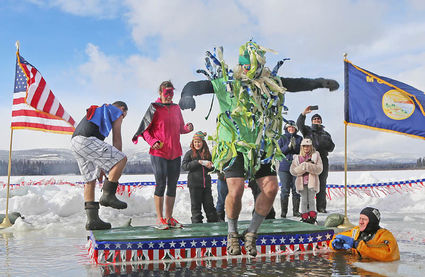 Mark Brown aka "Seaweed Man" takes the plunge. He won best individual costume and his team including Christian Brown and Courtney Klempel raised $800, the most of any team this year.

SEELEY LAKE – Despite several plungers unable to take a dip due to illness, 17 hardy folks made a splash in Seeley Lake at Tamaracks Resort for the second annual Chamber Chill Plunge Feb. 16. Proceeds from the event benefited the Veterans & Families of Seeley Lake and Seeley Lake Area Chamber of Commerce.

This year the event added a stage for plungers, decorated the plunge area and tents with an American theme and used propane heaters to heat the warm-up tents.

"This allowed for a warmer, more consistent heat source versus the wood stoves [used last year]," wrote Hayhurst. "The plungers were very happy with the additional heat this year!"

The plunge started with the Pledge of Allegiance. The first plunger in was Seeley Lake resident Cyle Morris, an Army veteran who was disabled after stepping on an IED.

The VFSL were happy to be asked to judge, fulfilling their participation requirement without getting wet.

"We give all the jumpers great credit, all of them, for stepping up and doing it," said one of the judges.

"Thank you for supporting the veterans," added another.

The judges appreciated veteran Cyle Morris and his cousin David Cozart for taking the plunge. They awarded them with the most patriotic team.

French Kiss won the best team costume for the second year in a row. Last year Amber Leetch, her father Jim and cousin Sheree Busby appeared as Caticornichu. This year they added Justin Cahoon to the team. Amber was a little French and the rest were a lot of KISS, an American rock band that started in the early 1970s.

Mark Brown, from Missoula and cabin-owner in Seeley Lake, won the best individual costume for his "Seaweed Man." He said he originally went to Loving Hearts looking for a costume. Instead he found a bunch of shirts that he purchased for $5. His wife, who is a quilter, cut them into strips and sewed them together to make a seaweed man.

Brown and his other team members Christian Brown and Courtney Klempel raised the most money bringing in $800 for the plunge.

"I heard it was for the veterans and [jumping into Seeley Lake in the middle of winter] has always been on my bucket list to do it," said Brown. "I told everyone lets go support the veterans. I ran around to different businesses and people and they were all very supportive of it."

Brown brought his family and grandchildren to Seeley Lake for the weekend and made it a family event, "Now we are going to the hot tub," Brown said and laughed.

When asked if he would return, Brown said "Absolutely. It was fun. I had a great time." However, he said next year he would bring boots for his feet.

"They all did an awesome job, each and everyone of them," said VFSL President Barbara Knopp. "Kudos to all of them."

Army veteran Cyle Morris and his cousin David Cozart kicked off the Chamber Chill Feb. 16. They won the most patriotic.

The plunge was even more fun as a spectator, or at least that is what many of them said. They cheered on the brave individuals who jumped and enjoyed chili, brats and chips served by It's Ah Wrap, popcorn and several campfires.

Next year, Hayhurst said they hope to cut channels around the plunge to divert water away from the jumping area. They also hope to have additional prizes to keep it exciting.

Hayhurst was grateful to major sponsors Blackfoot Communications, Tamaracks Resort, Seeley Lake Fire Department, Seeley-Swan Search & Rescue and Citizens Alliance Bank for making the event possible. She also thanked to all the businesses that donated gift certificates and other items to the event.

"It was a huge success overall," wrote Hayhurst. "A big thank you to our plungers, for braving the chilly waters to raise money for the VFSL, and their sponsors."