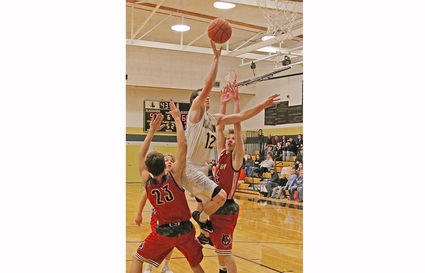 Senior Hunter Shelmerdine puts in two points and draws the foul near the end of the second over time. He nailed his free throw to tie the game with less than a minute to go.

SEELEY LAKE - Basketball fans got their money's worth Friday night as Seeley-Swan battled Darby's Tigers. After watching the Lady Blackhawks defeat Darby, they were kept on the edge of their seats through double overtime in the Boys' game. The Blackhawks eventually fell after a buzzer beating three-pointer by the Tigers.

The Lady Blackhawks struggled in the first half to contain Darby's three-point game with 21 of Darby's 26 points coming from three pointers.

In the second half the Ladies shut down Darby's long shots allowing just one three-pointer in the fourth quarter. Lady Blackhawks eas...