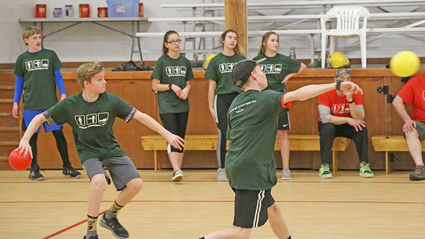 Eight Graders Emmet Zander and Keith Zander fight to keep their team alive in a semifinal match while their teammates watch from the sidelines.

POTOMAC - The eighth-grade class at Potomac Elementary spent Saturday, Feb. 19 dodging balls and raising money for their upcoming class trip to Galveston, Texas. The class held the Dodgeball Tournament at the Potomac Greenough Community Center where teams squared off against each other in best of three game matches.

Parent and event organizer Beth Copenhaver laughed afterwards that the Eighth Graders would have to settle for bragging rights, as their cash prize would be staying in the Texas trip fund.

Copenhaver was pleased with how the Dodgeball Tournament went even though they fell short of their goal of attracting 10 teams. She hopes future classes will keep the tournament going and felt that if it were made an annual event it would be easier to attract teams.

While the exact schedule of the class trip hasn't been set, they plan to go in late May. 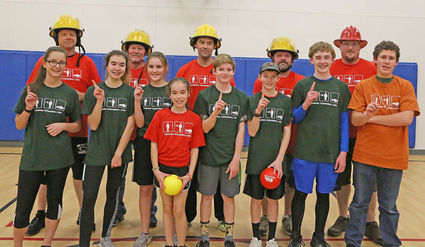 The students settled on Galveston after hearing Potomac's Principal John Rouse talk about Texas A&M's marine programs. A&M has an educational outreach program that offers a wide range of marine-based field trips and workshops from salt marshes to shark dissections. For leisure time, students are excited to find a beach to visit.

Several more opportunities to support the class trip are coming up including weekly Tuesday Trivia Nights at Cully's Bar and Grill in Potomac starting Feb. 26, Movie Night at the PGCC March 1, Pie and Poetry at the PGCC March 13 and a Soap Making Clinic at the PGCC April 16.

The class also plans to do Spring Poo Cleanup where they offer their dog poop pickup services once the snow melts.

For more information on any of these events or scheduling a poop pickup contact Copenhaver at 240-7185 or email potomacmtcapstonetrip8thgrade@gmail.com