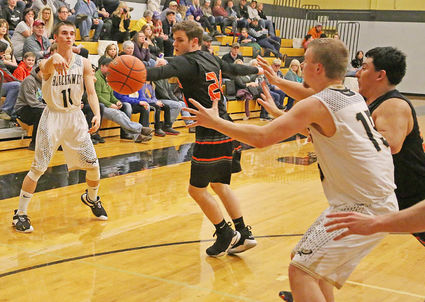 Junior Dakota Wood feeds the ball to senior Chance Johnson in the game against Plains.

SEELEY LAKE - The Seeley-Swan Blackhawks and Lady Blackhawks took on the Clark Fork Coop Mountain Cats in Alberton Jan. 25 and then hosted the Horsemen and Trotters from Plains Jan. 26.

The Blackhawks took a sizable lead over the Mountain Cats in the first half but blew the game out in the third quarter, more than doubling their score. The Blackhawks finished the Cats off 55-27.

Cordell Turner led the Boys with 15 points with Chance Johnson just behind at 14. Johnson had 2 of the team's 5 three-pointers and the Blackhawks hit 12 of 19 from the free throw line.