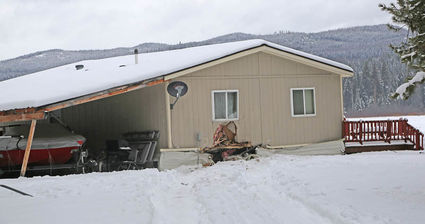 A truck ran into the home at the end of C Street after missing a right hand turn early Saturday morning, Jan. 19. No one was injured.

SEELEY LAKE – Early Saturday morning Jan. 19, a pickup ran into the side of a home at the end of C Street off of Boy Scout Road. Montana Highway Patrol Trooper Nick Navarro said the incident is still under investigation. As of Monday, no citations had been issued. No injuries were reported from the accident.

According to Navarro, the driver said the incident occurred around 1 a.m. Saturday. It was reported just before 8 a.m. that same morning.

The driver attempted to make a right hand turn into a driveway off of C Street.

"It appears that they were traveling too fast to make that turn. The truck traveled [straight] off of C Street, through the metal gate, through the deep snow and actually impacted the house that is there," said Navarro.

Navarro said the driver of the vehicle has been cooperative with the investigation. The homeowner has been notified and is in the process of repairing their home.