Protecting a bridge to the Bitterroots 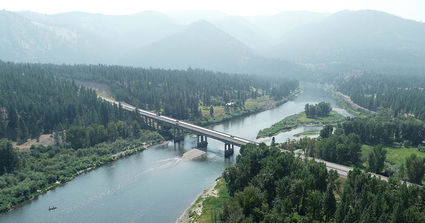 Vital Ground and Yellowstone to Yukon's land purchase protects 52 acres abutting the Clark Fork River and an Interstate 90 bridge, safeguarding wildlife movement under the highway and between the Ninemile and Bitterroot mountains. Grizzly bears have been documented in the area but do not have a resident population in the Bitterroots.

When a federal judge returned grizzly bears in the Greater Yellowstone area to the threatened species list in September, he cited the bears' fragmented range in the lower 48 states as one of his justifications. It is hard to call a species recovered, he argued, when it is isolated from other wild populations, as Yellowstone's grizzlies are.

Earlier this month, two conservation groups took an important step to ending that isolation. Twenty miles west of Missoula, near the confluence of western Montana's Clark Fork River and Ninemile Creek, the Vital Ground Foundation and Yellowstone to Yukon...