Avalanche awareness - Know before you go and check yourself 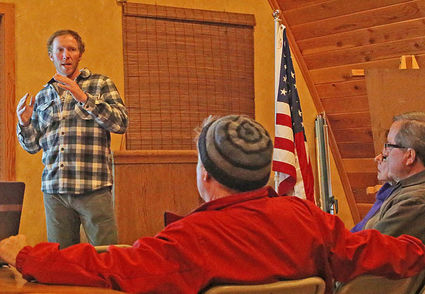 Glew has been mountain guiding and giving avalanche education for the past 15 years. He has skied all over the world and started working for the Missoula Avalanche Center two months ago. He said he has been caught in a bunch of avalanches.

"Most people who get caught in an avalanche survive. They are definitely scary," said Glew. "The more time you are out there, the probability is higher you will get caught in a slide."

From 2007/2008-2016/2017, Colorado has the most avalanche fatalities in the country with nearly 60 deaths. Washington falls in second place followed by Montana and Alaska in third with slightly more than 30 fatalities. Montana leads the country with 18 snowmobiling fatalities during the same time period. Across the country, the 21-25 age group has the highest number of fatalities from 1997-2006, closely followed by 26-30 year-olds.

Glew expanded on three questions to help recreationists be more aware of their surroundings. He said if the answer is 'yes' to any of the three, it is time to reconsider and possibly do something different.

Is the snow unstable?

Glew explained nine different avalanche types and how they are formed. These types are included in the avalanche forecast.

The most dangerous type is the deep persistent slab. A persistent weak layer exists and when the new snow falls on top, it prevents bonding.

"They can make it so it is not safe until it is in your drinking water," said Glew. "If you see this in the forecast, it is low probability, high consequence. Definitely check yourself. Don't mess with this unless you really know what you are doing and know the slope history."

Glew said snow packs do not like change. Heavy snowfall or rain in the past 24 hours, rapid warming or increased temperatures and wind events during a snow storm are all things that will increase the possibility of an avalanche.

Other visual clues of unstable snow include: recent avalanche in the area, cracking or collapsing snowpack that goes out more than two feet, whumphing sounds and hollow drum-like sounds on hard pack.

Am I in avalanche terrain?

While Glew said he has seen 15-degree slopes slide, generally slopes need to be greater than 30 degrees to create an avalanche. The prime slope angle for an avalanche is 34-45 degrees with around 70 percent of all avalanches occurring in this slope angle.

"It depends on conditions. If it is really high danger you are going to get slides below 30 degrees occasionally. A lot of times they will connect up where they will start on a 45 degree slope and the crown will go down to like 15. You could be on the edge of a slide and then next thing you know [you will be in the slide]."

Glew also said to avoid terrain traps including gullies, trees, cliffs, transition areas and cornices. The degree of exposure is so much higher and typically there is not an easy escape.

"You have to ask yourself if it were to avalanche, where is it going to end up?" said Glew. "It's good practice not to hang out in terrain traps, just go around it."

Aspect also affects snow condition. North and east slopes are colder, while south and west are warmer. Recreationists must also consider the slope in relations to sun angle and wind.

"Small changes can make a huge difference in the snow for solar warming and avalanches," said Glew.

Could I trigger an avalanche?

Glew said a good rule of thumb is if it is too thick to ride, it won't slide. However, Glew said there are vegetation clues that give ideas of where the snow has slid in the past. If there are large trees with missing branches, they could be in the runout zone of an avalanche.

Other areas to watch for triggering an avalanche include convex slopes and areas of tension in the snow. Shallow, rocky areas are also more likely to trigger a slide.

Safe travel protocols – Plan for the best, prepare for the worst

• One person on a slope at a time – spread out to disperse impact.

• Never descend directly above a companion or another group.

• Avoid stopping in or beneath avalanche paths.

• Watching each other closely from safe locations is important and makes for a better chance to get out and keep track of others in the group. If an avalanche happens, do not go for help. The best chance of survival for the victim is to be dug out in five minutes. However people have been trapped for up to 30 minutes and still survived.

• Stay alert to changing snow stability due to changes in aspect, elevation or weather factors.

• Be prepared and practice to rescue with beacon, probe and shovel.

• Choose the safest route possible to the ascent.

• On the descent, ski or board one at time from one safe point to the next.

• Think about an escape route out of the slide path.

Local Seeley-Swan Search and Rescue members said the places in the Seeley Lake area that are prone to avalanches are the Placid Bowls, Findell Slides and road to Lake Elsina. Deputy Heath Hanson added that they have had snowmobilers caught in a runout zone when someone else triggered an avalanche.

If caught in an avalanche, avalanche instructor Steve Thompson said, "Flight like hell because your life depends on it."

Glew added get a hand over your face, grab a tree or something stationary and try to stay on top.

Once the trails are groomed to the Seeley Lake Driftrider's warming hut near Lake Elsina, Seeley-Swan Search and Rescue's Gerry Connell in partnership with the West Central Montana Avalanche Center, will bury two beacons for recreationists to practice with using their beacon and probe. There are also "Are you beeping?" signs at the Seeley Creek and West Side Bypass trailheads that will give a green light indicating a riders beacon is on and transmitting.

"I hope you can identify the signs of avalanches, cracking, collapsing, wind-loading, solar warming...there is so much that goes into this stuff," said Glew. "I encourage you, if you do this a lot or even if you do it some and have the time, to take a course to dive into it more. There is just so much to this stuff."

For more information about advisories and forecasts, courses and other avalanche resources visit missoulaavalanche.org.