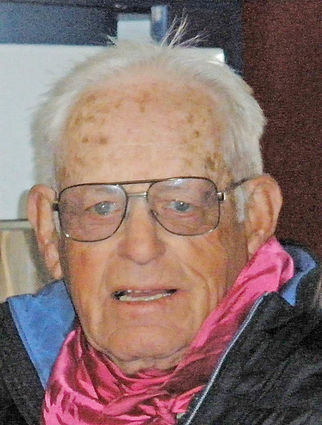 POTOMAC - Robert "Bob" G. Hall, a true pioneer of the Blackfoot Valley, served his family, community, county, state and nation. He was born Nov. 19, 1919 to Clarence Albert and Nina Gough Hall at Thornton Hospital in Missoula, Mont. and passed away Nov. 28 in Missoula.

Bob attended Potomac Grade School and graduated from Missoula County High School in 1938. After high school he took a year off before attending Montana State University (Missoula) and joining Sigma Chi Fraternity. In May of 1941 he enlisted in the Army and fought in the WWII Pacific Theater until June of 1945.

During his years in the military he worked his way up to First Sergeant in H Company, 161st Infantry Regiment, 25th Division. He received the Bronze Star with Valor, Good Conduct Medal, American Defense Medal, Asia Pacific Medal, WWII Victory, Presidential Unit Citation and Philippine Liberation Medal. Bob was always humble about his time in the service and was grateful to come home whole.

In 1950, Bob married Lucille Mannix of Helmville, Mont. and as he liked to say to his three sons and daughter, "you all know the rest."

Bob was the keeper of Hall Ranch in Potomac until his last days. A true steward of the land he and Lucille placed the ranch in a conservation easement to help sustain a healthy environment for future generations of Montana citizens. He said, "If you have something to worry about, you have something to keep you going." We'd like to think he is finally worry free.

Fondly known by family and friends as "Grandpa Bob," he took great pride in his family (immediate and extended). He taught everyone around him to be good citizens, work hard and to take a few extra minutes to do the right thing.

Throughout his professional career he worked for Gillespie Realty Co., Blackfoot Forest Protective Association, and was a respected forester with Anaconda Company, U.S. Plywood and Champion International. He was a lifetime supporter of the Potomac Community, he served on the committee to get the Potomac School on the National Historic Registry and helped to obtain the land for the Potomac Greenough Community Center. He was also an active supporter of 4-H, sat on the Potomac School board (21 years), the Missoula County High School board, was a livestock inspector (25 years), involved in the Soil Conservation Service (nine years), was a weather reporter for The Department of Commerce (25 years), a hunter safety instructor and member of the Blackfoot Challenge.

In lieu of flowers, donations may be made to Potomac Greenough Community Center or Greenough Potomac Fire Department.