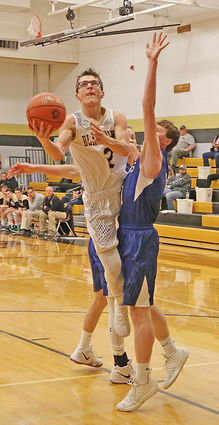 Sophomore Owen Mercado squeezes through defenders to put up the first two points against Drummond. Mercado scored 18 points in the game.

SEELEY LAKE - The Seeley-Swan Blackhawks and Lady Blackhawks took on Drummond for their first home game of the season Dec. 7.

The Lady Blackhawks took an early lead over Drummond and kept a couple baskets ahead throughout the rest of the game to a final score of 61-55.

Autumn Morse and Ashley Miller each scored 14 points to lead the Lady Blackhawks. Morse scored 2 of the team's 4 three-pointers. Kara Good and Taylor Dillree hit the other three-pointers.