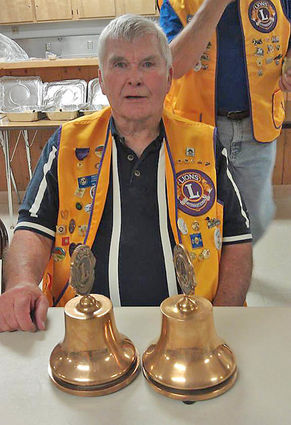 Neil Gordon Ruttenbur May 16, 1941 - Nov. 6, 2018 Neil Ruttenbur following a "Lion's Raid" where the Seeley Lake Lions visited another club and 'stole' their bell along with getting theirs back. Neil was the chairman of the committee, called a Lion Tamer, for a long time.

SEELEY LAKE - "Sober, steadfast, quiet and true. This can be said of very few."

Neil Gordon Ruttenbur of Seeley Lake, age 77, died of complications from cancer on Nov. 6 under the care of Hospice in Missoula.

Neil was born on May 16, 1941 in Deer Lodge, Mont. to parents Gordon and June Ruttenbur. After his graduation from Powell County High School in 1959, he accepted a position as a driver for Meadow Gold Dairies where he worked for more than 36 years.

Neil married the sparky Sherry Ann Goodman in 1961 and was a devoted husband for 55 years before her unexpected passing in 2016. The couple has three children, each of whom proudly served in the Military.

Neil was a talented and gifted man who enjoyed fly-fishing and woodworking. He was a great contributor to his communities and a friend to all who he stayed in touch with throughout his life. He will be deeply missed by those who loved him and by everyone who knew him.

He is preceded in death by his wife Sherry Ann Ruttenbur, his brother Stephen Von Ruttenbur and sister Carol Jean Smith; his son Loran Albert Ruttenbur, DC1, USCG of Deer Lodge and his parents Gordon and June Ruttenbur of Deer Lodge.